Tuska Comes offers Warpriest of Tuska armour, weapon overrides, abilities, and miscellaneous rewards, purchased by Reward Currency obtained from gathering Tuska fragments. The abilities (Sacrifice, Devotion, and Transfigure) from previous world events are also available to be purchased. During the world event, warpriest armour from previous worlds events was available to be purchased.

The names in the shop may not match the actual item name, e.g. the Warpriest of Zamorak cuirass is listed as "Zamorak torso". 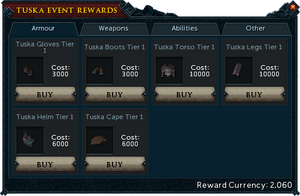 Warpriest armour is a set of hybrid armour which levels up with the player's Defence level, with a maximum of 75. The set has 3 possible stats: for Defence level 25-49, for Defence level 50-74, and for Defence level 75 and above. The stats are updated upon equipping the armour. If a player gains level 75 Defence while wearing an armour piece, they have to un-equip it and re-equip it for the stats to update.

Each piece of the Warpriest of Tuska armour set gives the player a 1% chance to deal a maximum hit against an enemy in combat, for a 6% chance in total. Wearing at least 3 pieces is required to gain this passive effect, similar to how the other warpriest armour sets function. 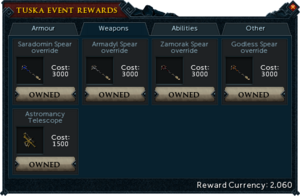 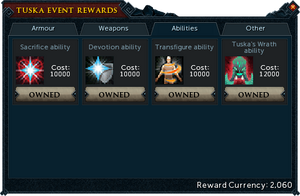 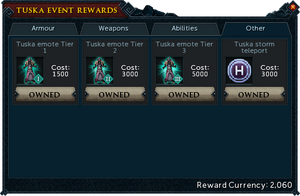 The Tuska Comes world event offered four new titles that could be unlocked by stabbing Tuska 5 times with a 100% charged spear, with a different title made available each week (with weeks starting on Sunday). Each title will be available for the rest of the event after its initial release. Titles from previous weeks are unlocked along with the most current title, if they haven't been unlocked yet. These titles are no longer available, following the end of the world event on 1 July 2015.

These titles were received:

Contribution to the world event could randomly unlock titles from previous events (such as The Virtuous, The Powerful, The Eternal, and The Boundless).

It was also possible to buy pieces of the Saradomin, Zamorak, Armadyl and Bandos warpriest armour with Reward Currency. Unlike previous world events, the same piece could be bought again even if already owned. The prices for each piece of equipment was:

Retrieved from "https://runescape.fandom.com/wiki/Tuska_Comes/Rewards?oldid=18842034"
Community content is available under CC-BY-SA unless otherwise noted.