Tuska Comes, first mentioned at RuneFest 2013 and expanded on at RuneFest 2014,[1] is the third world event involving four factions (Saradomin, Zamorak, Armadyl, and The Godless) banding together to try and kill the blind boar god Tuska, who is hurtling towards Gielinor in an attempt to devour it. Although players will be unable to side with Tuska, they will be able to side with one of the four factions trying to kill her. Its original release date was the third week of May,[2] but was moved back to 1 June 2015.[3] The event will span 30 days.

Each day is treated as a new round. If 100% total damage is done to Tuska, the faction that deals the most damage to Tuska wins the day, otherwise Tuska wins. Players must make their way from island to island to reach the front of Tuska, where they must stab her weak point with a Tuska spear, god-aligned to the faction the player chooses. The islands in Tuska's orbit, remains of planets that she has devoured, contain remnants of Anima Mundi used to charge the spear.[5]

From 0:20 to 0:00 of the hour, the event is unavailable. Other skilling methods become unlocked for players to obtain Tuska fragments, an alternate source of the Reward Currency which can be used on Wizard Chambers for 5 Reward Currency each. From 4 to 8 June players also receive 1 Astromancer credit for every fragment collected.

Skilling nodes are located on Tuska's sides, including green quills on her back which can be cut down for Woodcutting experience, and blue spines that can be balanced on for Agility experience. Players will gain 10x experience if they are balancing on the stump that has an electrical current around it.

Parasites are killable on Tuska's southern end for Slayer experience and uncommonly drop the Tuska fragments.

Players can start early; but only when a timer is active and counting down. The event can be started at any moment in the 20 minutes that it is active. Even if the event is started late, the player has a full 20 minutes on all four islands, and will get to stab Tuska.

Once every 30 seconds, a random player will be selected to hold a gatestone; players can teleport to them by hitting the teleport option provided in the bar above. This can be helpful for skipping obstacles or transferring to an island with an active node. If a player is alone, this function is unavailable.

Players will end up on an island seemingly having been influenced by one of the younger gods. There are two main tentacles on the main island (one if less than three players); they cannot be attacked, but spawn lesser corrupted growths which can be attacked. To hurt the corrupted growths, players must go to the Holy fire and equip the torch received to deal damage onto them. The fire only lasts 30 seconds, so players will need to return to replenish the fire. The area directly hit with the fire will be dealt with 500 damage, while the area around it in a 3x3 radius will be hit for 250 damage. Constant Firemaking experience is gained while attacking tentacles, regardless of the number of corrupted growths burned. During the last minute available on the platform, the Holy fire can provide about 60 seconds of fire. It should be noted that the lesser tentacles do not have infinite spawns.

Alternatively, players climb down to a graveyard where they can search the altar for a Relic of Life. This tool is required to enter the underworld. Digging a grave will result in the player entering the underworld, revealing one Lost Soul (this soul shows up as orange) and many Tormented souls on the main island to be released, which returns the player and the soul to the main world. Any player can capture the Lost soul, or attack the tormented souls instead. To free the tormented soul, kill it to possess the spirit and bring it to the Last Rites circle and it will turn the player back into a human. Anyone that attacks the tormented soul will turn into one upon its death. Capturing and freeing the lost soul gives Divination experience, while fighting and guiding a tormented soul gives Prayer experience; both can be done in one trip to the underworld, giving 6% energy each time.

Returning eight lost souls is one method to max out the player's contribution for this island.

Players will end up on another island with a tree in the middle. Several large tentacles appear that surround the island, but will not cause any harm. Woodcuttable vines, attackable tentacles, and Falling rocks can appear on this island. To proceed, players kill the tentacles, chop the vines, or mine the rocks that appear on the island, gaining mysterious herbs in the process. The herb must be ground into powder, and it can be used to nurture the roots to grow them. Each step in a root's growth requires a number of crushed herbs equal to the number of players. When a root reaches one of the pods surrounding the tree, it will turn into a flower which can be collected for a Vibrating seed. The seed can be used onto the core plant to release the Anima Mundi into the spear. The flowers also have roots which will lead to other pods. Vines and tentacles can block the path towards a pod, and must be chopped down or killed to proceed further.

Returning three energy seeds to the central tree is one method to max out the player's contribution for this island.

Players will end up on an island that attracts lightning. They can construct pylons from the shattered pylon hotspots (for Construction experience), which will attract a Sentient Lightning that can be lured to the Unstable Core in the middle of the island (for Hunter experience). The pylon will shatter after a Sentient lightning is attracted to it, which happens on the second lightning strike. Alternatively, players can build traps upon the targets that randomly appear on the ground; after a short while, this automatically attracts lightning to the unstable core (for Hunter experience). In addition, tiny balls of living Lightning will appear and may be attacked.

Killing the lightning (and sometimes doing other tasks) electrifies the player with a residual charge that should be brought to the Unstable Core for points. There is a specific amount of time before the charge fades, shown as a bar above the player.

When the four islands have been passed through, players are dropped from above onto one of Tuska's tusks and are given reward currency equal to 10x the percentage the spear was charged (1000 max). Players climb up Tuska's teeth and then stab the spear into one of her weak spots, resulting in the player saying a phrase depending on the faction with which they are aligned. The player is then sent back to the starting area and will receive their currency. Should the player not stab Tuska in time, they will burst into flame and be teleported back to the starting area.

Note: For Tuska to be defeated by another faction on any given day, Tuska would need a score of 0.0%.

If a faction wins for a day, they will not receive any rewards.

Performing activities give a Reward Currency specific to this world event. 1,000 Reward Currency can be obtained per day by completing runs on the islands and stabbing Tuska. No notification is shown when this limit is reached. More can be received by trading in Tuska fragments received by skilling and killing on her back to Wizard Chambers. Skilling and killing on Tuska's back is limited to 80 minutes per day and because fragments are found randomly, the number of fragments gathered per day varies.

Rewards include a tiered emote; cosmetic overrides of the god-aligned spears; the Tuska's Wrath ability; the Tuska storm teleport animation override; and Warpriest of Tuska armour, a type of warpriest armour that adds a small chance to deal a maximum hit against enemies in combat, including bosses. Four new titles can also be unlocked by taking part in the event. 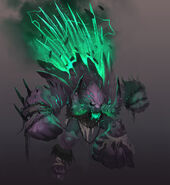