Start a Wiki
For the main version of the island, see Tutorial Island.
[view] • [talk]

Tutorial Island is a sunken island visited during Beneath Cursed Tides, where the adventurer explores the island and searches for clues as to why it sank.

Tutorial Island was originally a school for adventurers, in common use by year 169 in the Fifth Age. At Tutorial Island adventurers, trained by various skilled tutors, learnt several of the basic skills they would use in their adventuring on Gielinor. Tutors who taught new adventurers there included Brynna, the Master Chef, the Quest guide, Dezzick, Vannaka, the Financial advisor, Brother Brace, and Wizard Terrova.

Vannaka left at some point to train in Slayer, and eventually became a Slayer Master on the mainland. The banker died at some point, and the bank's affairs were managed by other staff. The other tutors remained on the island, and continued to train new adventurers there, until its eventual disappearance.

The following takes place during Beneath Cursed Tides.

By year 1 of the Sixth Age, Tutorial Island became completely submerged, sank under the ocean, and disappeared underwater. Hector Vivian, an evil wizard, had entered a portal that took him to Tutorial Island, but - as was customary, for all adventurers - was forbidden from leaving the island until he successfully completed the tutorial. Angered and frustrated, as he felt the tasks there were beneath him, he placed the island under a terrible curse, sinking the island underwater and turning all of its inhabitants into Crassians. These inhabitants were trapped there, awaiting rescue.

Wizard Myrtle, a visiting hydromancer affiliated with the Wizards' Tower, discovered the loss of the island underwater when she lost contact with her mentor, Wizard Terrova, who taught magic there. She prepared a spell enabling humans to breathe and travel underwater, but being afraid of water, was initially unwilling to use it on herself. She sent an adventurer to investigate, who discovered the fate of the island and the cause of its submersion. The curse on the island had to be broken by the adventurer performing new tasks related to the original tasks that were performed by new adventurers during the tutorial. Together, Wizard Myrtle and the adventurer defeated Hector Vivian, and trap him inside of a bubble under the sea.

After Hector Vivian's defeat, the island remained underwater, but the curse on the skill tutor inhabitants was broken, and the inhabitants were freed, returning to the mainland as humans. They arrived on dry land, at Mudskipper Point, along with the adventurer, ready to start new lives. Players may speak to Wizard Myrtle to return to Tutorial Island.

During and after Beneath Cursed Tides the following music tracks are used on Tutorial Island:

These are tributes to the music that originally unlocked upon entering Tutorial Island:

The mining area underneath the island. 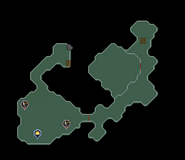 A map of the dungeon.

The bank of Tutorial Island. 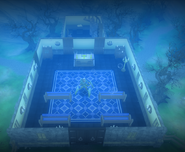 The chapel on Tutorial Island.
Click an image to enlarge

Retrieved from "https://runescape.fandom.com/wiki/Tutorial_Island_(Beneath_Cursed_Tides)?oldid=22211129"
Community content is available under CC-BY-SA unless otherwise noted.