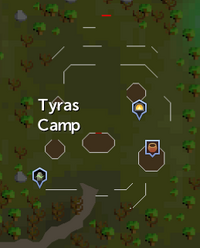 Tyras Camp is an encampment located in the secluded, south-western part of Isafdar, the elven forest, part of the Tirannwn kingdom. Significant progress in the Regicide quest is required to gain access to Isafdar and the Camp. It is sometimes used as a point of entry to the elven lands, via the charter ships. The camp is well known for the shop selling most types of halberd in a store there, including the dragon halberd. However, the prices here are often higher than they are on the Grand Exchange.

It is also possible to reach Tyras Camp from Lletya, the Underground Pass or the Arandar Palisade, but it would require walking through the dangerous forests of Isafdar. Note that the player cannot charter a ship to Tyras Camp until they have reached this area during Regicide.

Upon completion of all the Medium Tirannwn Tasks, the player is awarded the Tirannwn quiver 2 which grants teleport access to this camp and other locations in the elven lands up to five times per day.

Following the Elven Civil War, King Thoros, the King of Kandarin, requested that the outpost be maintained and turned into a permanent human settlement with the permission of the Elders of Prifddinas. This has allowed the troops from the army to be rotated between the camp and Ardougne. The catapult to the north of the camp has been kept as a memorial to those who perished in the war.

Below is a list of NPCs of the camp.

There is one general store located in Tyras Camp, which only contains halberds. Players can also trade halberds here.

If the player has reached the Tyras Camp in the Regicide quest, it is possible to purchase all the halberds out of the store, with the exception of the dragon halberd which is always at 0 stock until you have completed the quest.

These quests are involved in the camp:

Retrieved from "https://runescape.fandom.com/wiki/Tyras_Camp?oldid=20626928"
Community content is available under CC-BY-SA unless otherwise noted.