Start a Wiki
For the monster, see Tyras guard.

One of King Tyras's men. 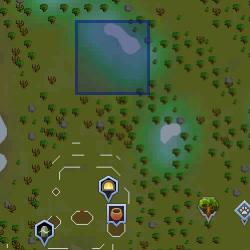 The Tyras guard, also known as the Catapult Guard is one of King Tyras's men. He plays a minor role in the Regicide quest and a leading role in the Catapult Construction quest. As seen in both quests, he is a very incompetent guard, both in combat and his duties. Hence, he gets the job of guarding the catapult, which can be found north of Tyras Camp. He was also a tin miner before, as mentioned in the quest Catapult Construction, but the lousy pay and terrible working conditions made him leave his job and become a guard.

During Regicide, the player must give him a Cooked rabbit in order to distract him and use the catapult in order to kill King Tyras by throwing a barrel bomb to his tent. After doing so, the player may talk to him and he'll ask the player if there was anyone near the catapult as the king has been killed by a "ball of fire"; in which the player replies that they were the only one there keeping watch on the catapult while he was eating.

During Catapult Construction, he is about to lose his job as General Hining wants to fire him as he cannot prevent the catapult's wood from rotting. He will then enlist the player's help in keeping his job.

While this Tyras guard is not involved in Plague's End, once the quest is completed, he tells the player that he managed to persuade General Hining to leave the catapult as a war memorial.

Retrieved from "https://runescape.fandom.com/wiki/Tyras_guard_(catapult)?oldid=24563334"
Community content is available under CC-BY-SA unless otherwise noted.