Tzhaar City I, II and III 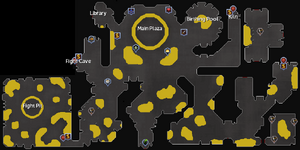 The TzHaar City is a city located underneath the volcano on Karamja. It is home to the TzHaar, a golem-like humanoid race. This is where the TzHaar Fight Pit and TzHaar Fight Cave activities can be played, as well as the only city that uses the Tokkul currency. The TokTz-Ket-Dill, The Elder Kiln, and Brink of Extinction quests also heavily feature the city. The city is also notably the one of the few sources of Onyx in the game (other than kingly impling jars, Prifddinas gem rocks, Nex, Kal'gerion Demons and the Queen Black Dragon).

The main entrance to the city is on the top of the Karamja Volcano, which is located west of Musa Point on Karamja. It is west of the rock entrance to the Crandor and Karamja Dungeon.

The TzHaar City features several different native inhabitants of the volcano, known as the TzHaar:

North of the Plaza there is a big door guarded by two TzHaar-Kets. When asked why players cannot pass, they are told that it is because the TzHaar citizens do not trust them enough to permit them further into the city yet. Even after completion of The Brink of Extinction, the player will be told that they cannot come in, as the inner city has streets full of lava, and they will not let the player in for fear of their skin burning off.

With the release of TokTz-Ket-Dill quest, players were able to access some certain areas of the city, such as the library and the mines. The TzHaar language and numbering system was also introduced to players through this quest.

The following places exist within the TzHaar City:

Note: The shops will not accept coins as currency; only Tokkul. TzHaar merchants will not buy items from players in exchange for Tokkul. 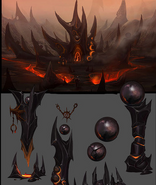 Retrieved from "https://runescape.fandom.com/wiki/TzHaar_City?oldid=19892130"
Community content is available under CC-BY-SA unless otherwise noted.