TzTok-Jad is the final and most powerful TzHaar creature in the TzHaar Fight Cave, appearing at wave 63. TzTok-Jad was the strongest monster in the game for almost three years. Its name can be roughly translated to "Obsidian fire elemental".

Players must fight TzTok-Jad on their own, without the use of Summoning creatures or a dwarf multicannon for assistance. Players must defeat 271 other monsters before fighting Jad, resulting in a high usage of food, potions, ammunition, prayer, etc.

TzTok-Jad is strong enough to pose a danger to any inexperienced or unprepared player, regardless of skill or equipment.

A player may receive a task of TzHaar monsters from Kuradal, with the challenge to "Upgrade" your task. Doing so will result in a task of Volcanic Creatures. With this, you can opt to kill through the Fight Cave all the way to TzTok-Jad for a special reward of 25,000 Slayer experience (not including its base reward of 1,309 experience), in addition to any experience gained during the Caves.

Likewise, a player may receive 1-4 TzTok-Jads as a Soul Reaper task. As the Fight Caves may take a long time for players, the TokHaar version of TzTok-Jad may be killed in its place.

If you don't have a Prayer level of at least 40 it will be near impossible to get the Fire Cape. Without magic and range protection prayers, it is possible for TzTok-Jad to kill you in one hit. Additionally, the Tok-Xil's Ranged attack is very accurate and can do great damage over time even with the good defence stats, thus 40 prayer is a must. Despite the fact that most prayers are obtained at level 40, level 60 prayer or higher is highly recommended, due to the fact that you will be praying for the majority of the time spent in the Fight Cave. Also Prayer has been reduced as not to block full damage and so will be drained more quickly.

If the player has the required Prayer level (71), using Ancient Curses is highly effective. The sap curses are recommended to lower his Defence. The deflect curses drain at the same rate as protection prayers, and as the Ket-Zeks and TzTok-Jad are fairly accurate, the player can deflect a decent amount of damage back to the monster, with Deflect Magic or Deflect Missiles. In TzTok-Jad's case, the player could quite possibly deflect hundreds of life points back towards him during the battle. However TzTok-Jad will still summon his healers at 50% health, even if damaged only by deflect prayers. Players should always focus on prayer switching even if TzTok-Jad is at low health as he can still hit over 6000 life points.

Fighting TzTok-Jad requires a certain amount of skill and calmness. When the wave starts, it is recommended that the player has auto-retaliate on, so that they will be drawn to him if he spawned out of sight, and the Protect from Missiles prayer activated, since that's his most common starting attack. It is recommended to use Barricade or Resonance if Jad spawns out of sight and you are using a shield, as it will negate damage long enough for you to find him. It is not recommended to engage TzTok-Jad using melee, since TzTok-Jad will use all three types of combat to engage the player, and it is a lot easier to protect against two combat types than three. Therefore, a combination of Ranged attacks and Prayer is usually preferred. A sharp eye and swift reflexes are necessary to stand any chance of defeating this monster. TzTok-Jad will use Magic and Ranged attacks to defeat a player that is not using melee to fight him. It is critical that players know the warning signs for these attacks and switch between the protection prayers accordingly before the attack lands.

TzTok-Jad can deal over 7150 life points in one hit so unless you have over 7250 life points, you can potentially be one-hit if one of Jad's attacks hit you. Most players use Saradomin brews in conjunction with Restore potions or Overloads to boost their life points above their maximum normal life points, to reduce the chance of dying from Jad's attacks if something goes wrong. However, there is no guarantee that Jad will hit his maximum. However, letting more than one of Jad's attacks hit you in a short period of time is almost a certain death. Tip: Eat only after you have the correct prayer selected for Jad's next attack; prayers are always the first priority.

Once TzTok-Jad is reduced to 50% health, he will summon four Yt-HurKot (which are also called healers, but not mentioned in game) to come and heal him repeatedly. The player must deal with them whilst warding off TzTok-Jad's attacks. They will continue to heal TzTok-Jad if they are within 4 spaces of him, regardless of whether they are attacking you or not. You must therefore lure the healers a sufficient distance away from TzTok-Jad before they can fully heal him. This can be made easier by using the chain or ricochet ability (depending on if you use range or mage) since this hits up to 2 other opponents and recharges reasonably fast. However, if you do not want them to attack you, you can run through TzTok-Jad (be careful since he might melee you). If you kill these Yt-HurKot, they will respawn when TzTok-Jad is back at half health and heal it again if they had healed TzTok-Jad back to full health before being killed. If they didn't fully heal Jad originally (i.e. they only healed him to 39,999 LP or less), then they will not respawn. Also, if you kill them while TzTok-Jad's health is under half, they will not respawn again.

Even though this sounds simple enough, in reality it is much harder. You may lose concentration for a few seconds; this is more than enough time for TzTok-Jad to deal a fatal blow. It is recommended that you make yourself as comfortable and calm as possible in order not to lose focus, since just one mistake may get you killed. If Jad spawns in a position where he cannot attack you, you should probably make the most of the time that it gives you in order to calm down and only attack when you are ready. However, Jad can spawn in the middle of the arena, not allowing you to choose when you want to attack. After you have prayed against Jad's first attack, you should run towards him to see his next one.

Additionally players should be warned against trying to tank any of TzTok-Jad's attacks unless they have extremely high defence (99 defence, super defence potions, and very high level armour) as he tends to either miss or hit close to his max which makes him less predictable, and so it is not uncommon for two of these hits to land one after the other, killing the player without a chance to eat.

TzTok-Jad will not drop any items. Once players manage to kill this monster, however, they will be rewarded with the Fire Cape, along with 16,064 Tokkul.

A player wearing a Fire Cape 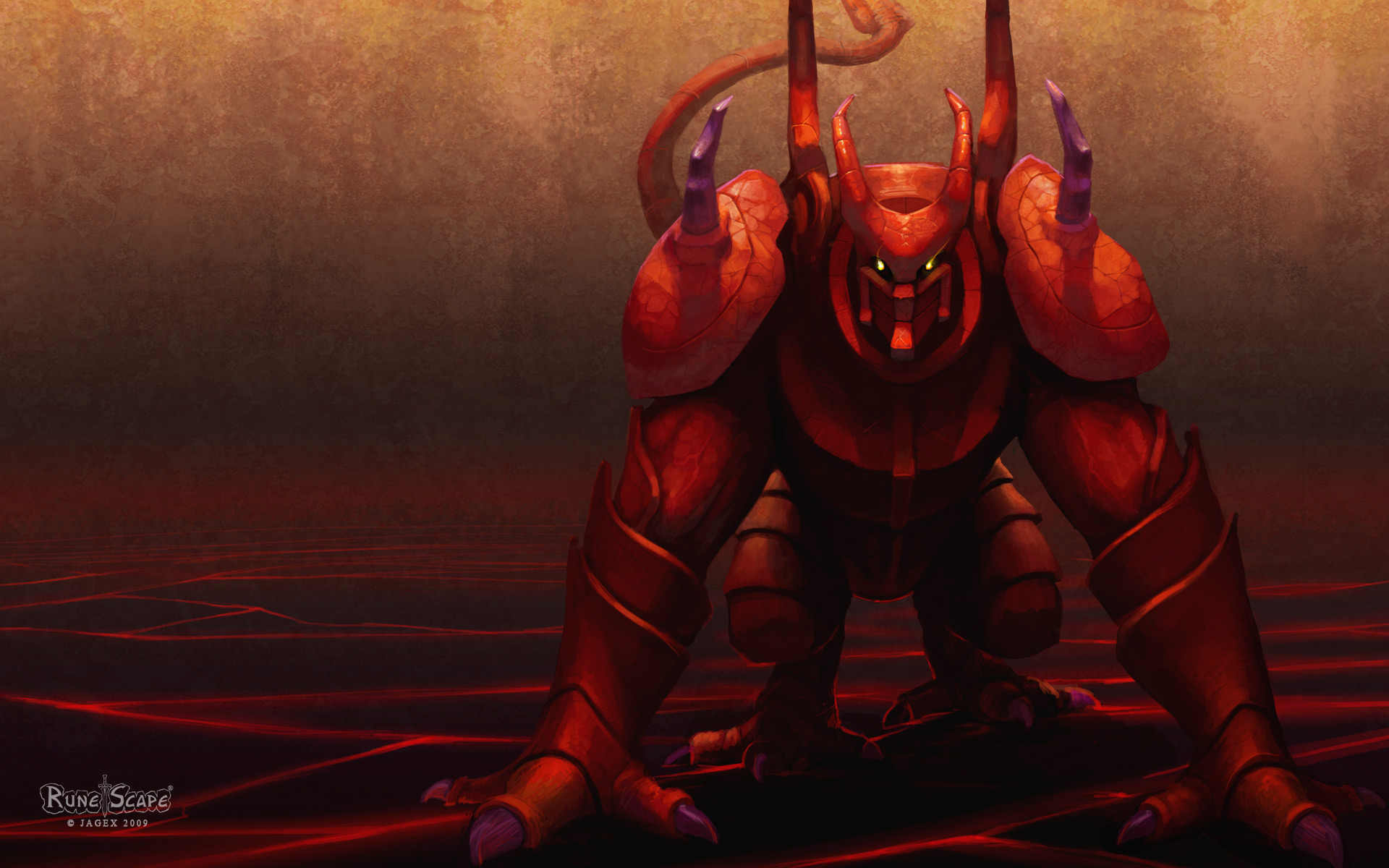 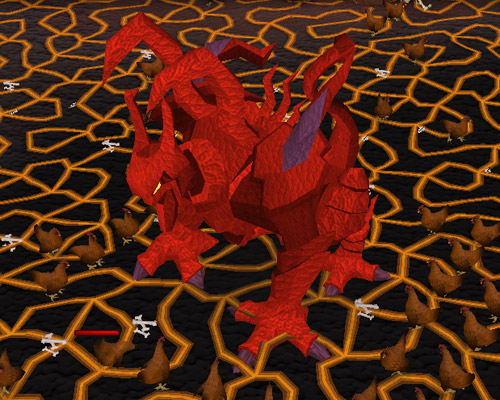 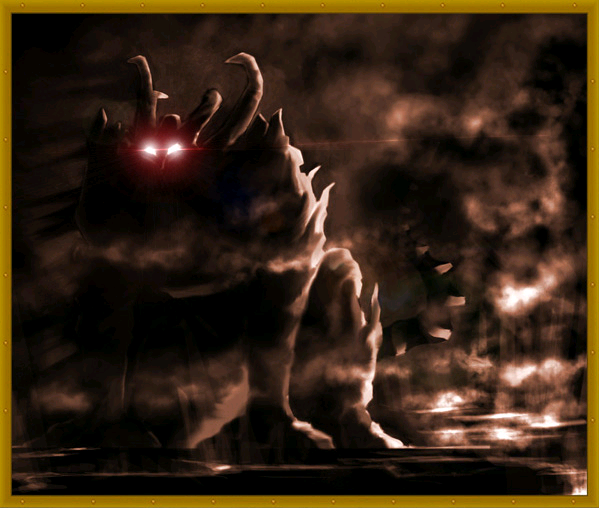 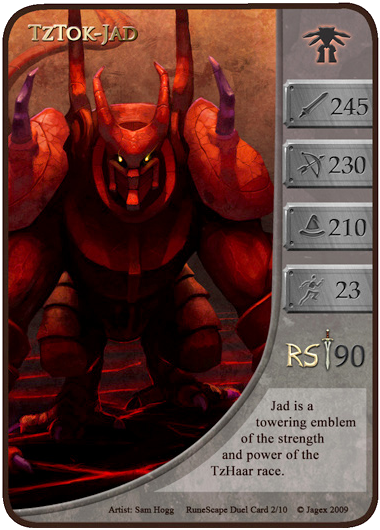 Jad in the Runescape Duel Cards 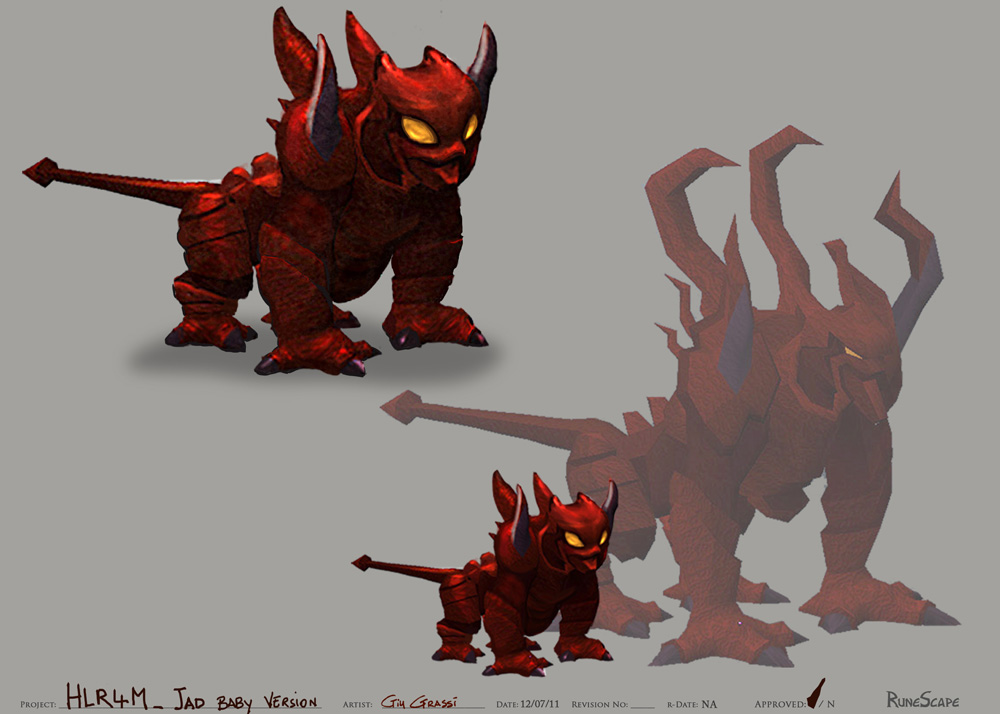 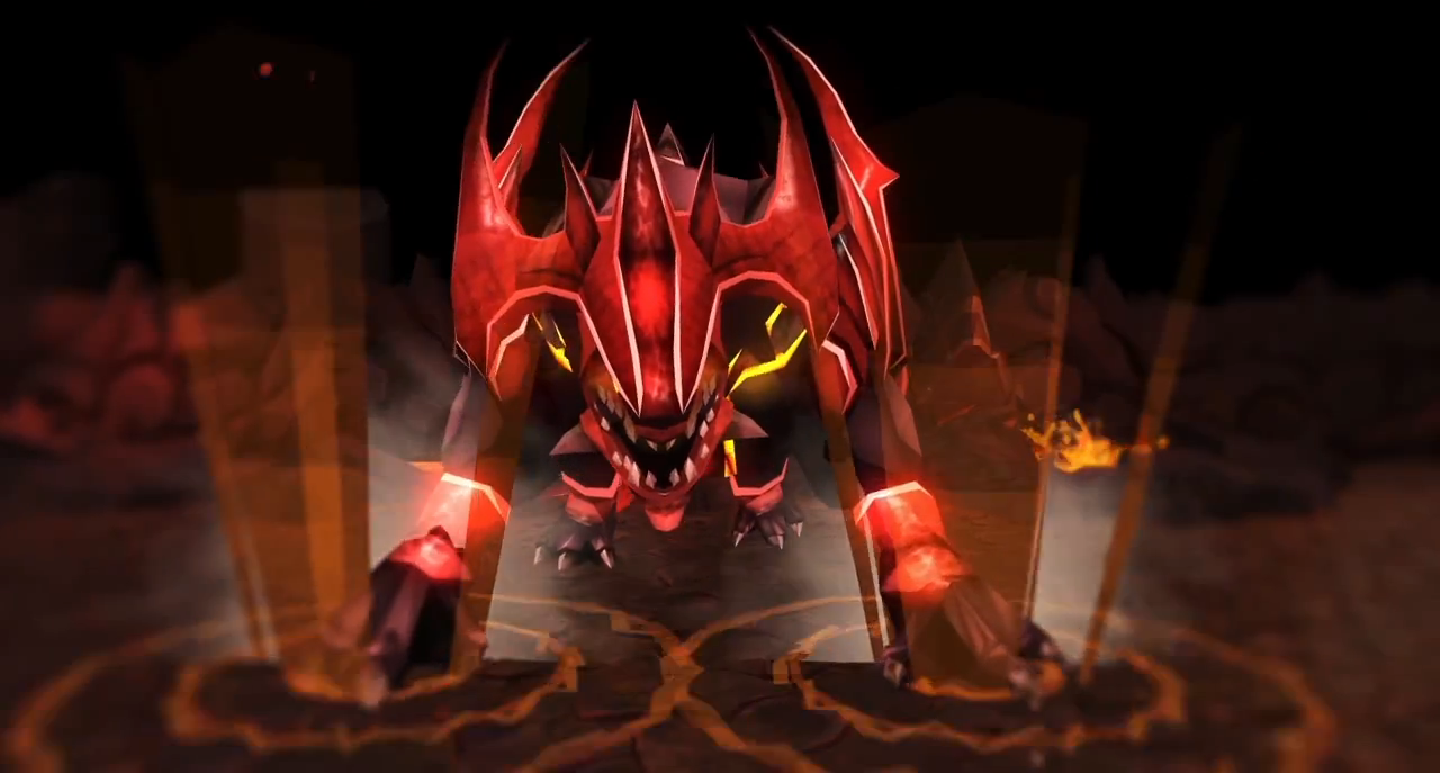 The new TzTok-Jad after graphical rework

Retrieved from "https://runescape.fandom.com/wiki/TzTok-Jad?oldid=24308622"
Community content is available under CC-BY-SA unless otherwise noted.