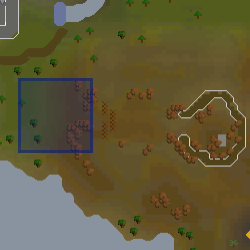 Uglug Nar is an ogre shaman who wanders around outside Jiggig along with several other ogres, including Grish, who starts the quest Zogre Flesh Eaters. He was going to be part of the ogre's dance at Jiggig, but due to the recent Zogre and Skogre invasion, his job has shifted to discovering an antidote for the potent disease the undead ogres carry.

The shaman can also be an NPC for Treasure Trails, and may occasionally give out Puzzle boxes.

After the player has learned on how to make relicym's balm during Zogre Flesh Eaters, they can sell a relicym's balm by using it on him. He will pay 1,000 coins for a four-dose potion, and 650 coins for a three-dose potion. After selling him the potion, he will open his store for player's use. Unlocking his shop is requirement for the master quest cape.

Retrieved from "https://runescape.fandom.com/wiki/Uglug_Nar?oldid=24562560"
Community content is available under CC-BY-SA unless otherwise noted.