Unannounced phenomena are various events in RuneScape that have at one time or another hinted to future updates.

Will o' the wisps

Prior to the introduction of fairy rings, will o' the wisps appeared at various points around RuneScape in all of the locations that the fairy rings would be placed.

On 27 May 2009, submarine periscopes could be occasionally seen surfacing in the water in the following locations:

The submarine was later featured in Hunt for Red Raktuber.

Voices could be heard within the eastern ruins of the Wilderness. They were a foreshadowing of the Spirit of Summer quest.

Prior to release, there was much speculation that it could be the third in the Curse of Zaros saga. The voices can only be heard by members.

Normally, these messages will appear simply as "Woo Woos", however, when wearing an amulet of ghostspeak, players can understand their meaning.

Normally, ghosts don't speak via the chatbox, the only other records of a similar phenomena are inside the Underground Pass, before Iban is killed, and in the two existing chapters of the Curse of Zaros saga, this is where this concept came from.

All the possible phrases the voices say (to date):

She took up a regular station in the Ancient Cavern on 8 December 2009.

A player being affected by the strange power.

On 23 January 2010, at approximately 19:48 UTC, a strange power was felt by all players online at the time. This had a massive effect on the community, with the RuneScape Forums being flooded by speculation of what it could be and its true purpose.

Later, Jagex confirmed that the strange power was a hint towards Daemonheim, stating, "The strange power that knocked players to their feet in early 2010 came from Daemonheim, or so the Fremennik believe. Their seers traced the source of the power to come from this point in the Wilderness, and they gathered dozens of warriors to explore Daemonheim's depths. Not everyone has come back, however."

It turns out the strange power was due to the death of the last Chelon-Mah, as confirmed by Bilrach during the quest Dishonour among Thieves. The same thing happens in the background during one of the cutscenes in The Ritual of the Mahjarrat, when Jhallan is killed by Lucien.

The frozen door was present in the God Wars Dungeon since its release, but on 20 December 2010 an "open" option and a rumbling effect was added. When trying to open the door, a voice threatened the player with the following phrases:

The area was later revealed to be the Ancient Prison, the Zaros dungeon.

On 2 July 2011, at roughly 19:03 UTC, large rocks fell from the sky, causing the screen to shake. The rocks remained in place for a few weeks until the release of Clan Citadels on 26 July 2011. Chickens started appearing around RuneScape after the update on 7 July 2011. The chickens had smoke covering them and disappear after approximately 10 seconds. Avalani also appeared at the Clan Camp throwing chickens into a portal. This is identical to the "Chicken" emote from the rock fragment reward from Cryptic Clue Fest III.

They appeared in the following locations:

On 18 December 2011, dozens of level 22 snow warriors, rangers, and mages appeared at the Grand Exchange. They dropped several snowballs on death and did not fight back.

The figure teleporting away

On 18 February 2013, a Shadowed Figure could be seen around RuneScape before the release of The World Wakes.

He appeared at the following locations:

During The World Wakes, the Shadowed Figure was revealed to be Sliske.

On 24 June 2013, Jagex released scopuli, who appeared at the Grand Exchange, Falador and the borehole.

As a preview to Tuska Comes, Tuska's face showed up, tinted the screen cyan and shook the screen. Players fell and were given the message "You sense something is not right, as if this could be the beginning of the end."

A crashed rock also landed south of Barbarian Village, where it could be mined for meteor shards. Eventually, it would vanish and a single Docile strange insect along with a horde of Strange insects attack the players would spawn. The docile strange insect could then be lured to the Airut located at the Piscatoris Hunter area where upon arrival, all Airut will begin to chant out Tuska's name.

On 10 August 2015, and over the course of the following days, villagers began to disappear from Burgh de Rott. One villager, specific to each player, would go missing every day a player visited the village, having The Branches of Darkmeyer quest completed. Each time a villager disappeared a missing poster would appear; Amelia and Rory's dialogue about the Branches of Darkmeyer updated to note their disappearance. A total of 20 villagers disappeared from Burgh de Rott, leaving only Amelia, Rory, Aurel, Cornelius, Elisabeta and Radu behind.

After 7 disappearances, Veliaf Hurtz gained new dialogue. Speaking with him, he'd reference the people who have disappeared from Burgh de Rott, and speak of rumours that Lord Lowerniel Drakan was poised to make his return.

The prerelease for Sliske's Endgame, an eclipse skybox and a message in chat, was activated on 17 December 2016.[1][2] Players were also levitated and enveloped in a green light. However, the eclipse and its effects did not trigger for players that were in combat, in an instance, or in a cutscene.

The following messages also appeared once every 20 minutes, starting at 19:06 UTC from the top:

After the third message, Armadyl returned to the top of his tower. The third message was repeated 4 minutes after being originally broadcast. It is unclear whether or not that was intentional. Further messages started appearing approximately every 10 minutes at 20:00 UTC, starting from the top:

After the third message, Saradomin appeared at his throne in the altar room of the White Knights' Castle. Additionally, Commander Zilyana can also be found near the farming patch on the top of the castle, and Padomenes arrived in the castle courtyard, training several Saradominist crusaders. Messages began appearing approximately every 20 minutes at 20:30 UTC, starting from the top:

After the second message, Zamorak appeared on his altar on the 1st2nd floor[UK] of the Black Knights' Fortress.

All three gods can be spoken to and each have dialogue relating to Sliske's Endgame. The eclipse appeared again at 21:00 UTC.[2] On free-to-play worlds, only Armadyl appeared and he could not be spoken to.

During a conversation in the "Lore FC" friend chat it was revealed by Mod Shauny that the summoning conditions for each god were, in order, killing muggers and bandits, praying at an altar (specifically the White Knight's?) with the Devotion ability activated, and creating as well as consuming a Super Zamorak Brew.

The City of Prifddinas during the eclipse 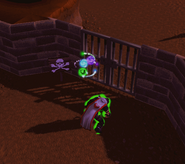 A player glowing green during the eclipse

Armadyl returns to his perch

Saradomin returns to his throne

Zamorak at the Black Knights' Fortress
Click an image to enlarge

Multiple teasers appeared for the Magister boss, appearing on 6, 7, and 11 June 2017. Additionally, mysterious obelisks appeared within Menaphos. Interacting with them grants a large amount of city reputation.

The final message that appeared on 11 June 2017 was also broadcasted globally.

On 10 July 2017, there was a mysterious server-wide announcement that stated 7 days to go until the Announcement. It was unknown what this was referring to as no additional context was given. The message was also broadcasted on Old School RuneScape. Similar messages were tweeted on the social media accounts of Jagex employees that are working on both games.[3][4]

On 24 January 2018, players once again felt a surge of energy which triggered their World Guardian powers, raising them into the air and causing them to glow green for a short time. Immediately following, the sky eclipsed itself as it had during the Sliske's Endgame prerelease teaser. Mod Shauny later confirmed on Twitter[6] that the event was a teaser for the long-awaited Sliske's Endgame replayability.

Retrieved from "https://runescape.fandom.com/wiki/Unannounced_phenomena?oldid=21781589"
Community content is available under CC-BY-SA unless otherwise noted.