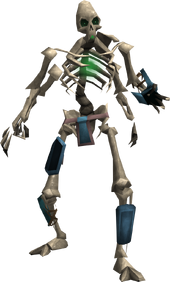 Undead heroes are members of an army being raised by the Mahjarrat Lucien during the quest While Guthix Sleeps. He raised them through necromancy at the Chaos Temple in the Wilderness. Nearly immediately, he realised that he was being spied on by an adventurer wearing Dagon'hai robes, attacking them and disintegrating two Elite Black Knights instead. A group of warriors led by Hazelmere intervened, with Mazchna and Harrallak Menarous fighting the undead heroes while the rest fought Lucien. Lucien slew all the warriors who faced him and wounded Mazchna and Harrallak before leaving with the remaining undead heroes.

Retrieved from "https://runescape.fandom.com/wiki/Undead_hero?oldid=21214736"
Community content is available under CC-BY-SA unless otherwise noted.