RSCOS
This article is about the dungeon. For the quest, see Underground Pass.
Not to be confused with Galarpos Dungeon.
[view] • [talk] 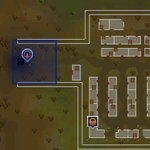 In the early years the Underground Pass was a trading route used by the Elves. Later, when Prifddinas became under control of the evil elves, Iban (the spiritual son of Zamorak) took control of the Pass. During the quest, it is the player's job to kill Iban. After that, the Pass is under the command of King Lathas from East Ardougne.

Getting through the Underground Pass

The following only contains information on how to get through the pass after the quest is done.

The player will not be able to enter Iban's Temple and the Elven lands until the player has spoken to King Lathas at the start of Regicide. The player's quest journal will mention about assassinating his brother if they have talked to him. For using the pass, it is recommended to have a high agility level. A Thieving level of 50 is another advantage.

These items are needed:

These steps are to be followed to cross the pass:

A swampy bog in the pass 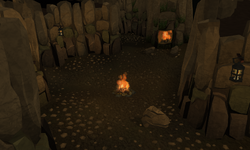 A furnace within the pass

The door leading to Iban's cavern

The camp of the four trapped dwarves 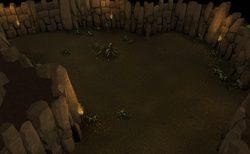 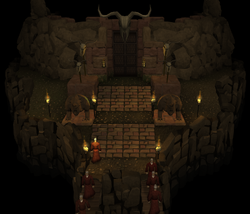 The Lair of Lord Iban 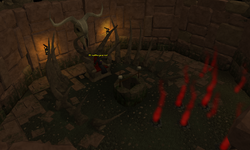 Iban on his throne

Retrieved from "https://runescape.fandom.com/wiki/Underground_Pass_(dungeon)?oldid=22711034"
Community content is available under CC-BY-SA unless otherwise noted.