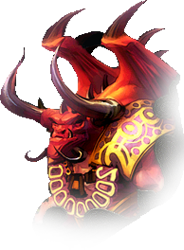 It's been over 10 years since RuneScape first opened its doors, and during that time, over 200 million players have passed through them. This is an immense milestone and to celebrate in true RuneScape style we have a suitably awesome event in game for you.

Party demons have appeared in the Barbarian Village[help], Varrock Sewers[help] and the Bandit Camp, but they've been partying for so long that they just can't stop. Hey Presto the mage, who's waiting for you near the demons, knows just how to put them out of their misery though, and it's up to you and your friends to take down the demon's 200 million hit points with the Boogie bow. There are no requirements needed to wield the Boogie bow - so everyone can take a shot. A special party gift awaits those who do. What's more, its open to both free players and members and totally risk free - no deaths from the demon's!

But hurry, the demons won't be partying for long.

As well as our in-game event, we've launched our celebratory site. In honour of you, we have produced a ton of great stuff to feast your eyes on. There's a timeline to well up the nostalgia for you - with all the significant events in RuneScape's history. There's an infographic with some truly mind bending factoids, a video with some words from our team, and a page dedicated to celebratory videos made by you, our fantastic players. The testimonial page features a playlist from our video competition with our 200 winning videos (who all get signed concept art), and our 5 finalists who are each in with a chance of winning lifetime membership to The World’s Greatest Adventure.

Enjoy the party! And a massive big thanks from us to you!