A Stray in a Manger

A Stray in a Manger (free players and members)

The stray dog of Varrock has been a flea-ridden, doleful-eyed RuneScape mainstay since 2007, but enough is enough: in the spirit of seasonal goodwill and festive charity, it's time to give the stray dog a home.

In this year's Christmas event - A Stray in a Manger - you'll help out a snow imp who's been assigned to running Pet Christmas in Santa's stead. He'll ask you to round up the stray dog of Varrock and three other transient pooches from around Gielinor, in order to imbue them with a sense of purpose: as his stand-in reindeer!

Once they've delivered presents to the pets of the world, you'll have the choice of which of the four dogs you'd like to take on as your own, and a choice of locations in which to establish a fixed address for your four-legged friend. You'll have up until the end of the year to decide which dog and which kennel location are for keeps. After that, they'll remain a persistent part of the RuneScape world, as you see it.

Your rewards will be a wearable Santa beard and a Gift of Giving. The Gift of Giving works in a similar way to the parcel in the party game Pass the Parcel: you can open it once and receive an item of decor for your kennel. You can then trade your Gift of Giving for one held by another player, and you'll both be able to open the next layer or wrapping for another item. If you're lucky, you'll reach the item in the centre, which can be either a cosmetic Santa sack item for free players or members, or - for members only - a wayward snow impling who can grant you bonus Hunter XP (see the Snow Implings section). If you get to the centre and your Gift of Giving disappears, or you lose it for any reason, you can always get another from the snow imp and carry on swapping. 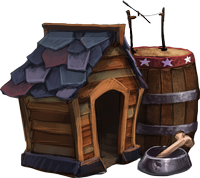 The decorations come in five types - colour schemes, bowls, mats, toys and flea circuses - and each type has variations themed around Saradomin, Guthix, Zamorak and Zaros. There's even a 'Santa' title to unlock - usable only by members - if you can get hold of at least one of each of the following: a bowl, a mat, a toy and a flea circus.

It's not possible to continually swap Gifts of Giving back and forth between the same two people, so get into the festive spirit and start swapping with as many people as you can!

Members will also be able to catch errant snow implings found flying across the world. These have no Hunter level requirement and can be caught bare-handed, but give a range of festive fare from previous Christmas events or kennel customisations in exchange for their freedom.

There's even a small chance that a captured impling will be one of the snow imp's wayward assistants. There are four of these, and each one is worth 50,000 bonus Hunter XP - stored and given out as you train - when handed back to their boss. They can also be found in layers of the Gift of Giving.

How to start A Stray in a Manger:

Speak to the snow imp just north of Draynor Village.

Santa's looking blue in the face in our recent Behind the Scenes video, as he takes you through A Stray in a Manger. Brr!