Christmas is coming! Log in daily for a different Advent Calendar treat, race reindeer terrorbirds, and watch your gains snowball with Winter Weekends.

From 00:00 UTC on 1st December, enjoy daily gifts from the in-game Advent Calendar.

Each day until Christmas brings a new surprise. Day one gives a Christmas piñata, which can contain one of four new rares. Log in and see what you’ll get!

Treasure Hunter will offer more of each day’s gift, for that day only. Get the most out of the Advent Calendar by logging in daily, seeing what the prize is and heading over to Treasure Hunter if it takes your fancy.

For any days that you miss, you can claim the gifts at any time until the 9th of January. The Treasure Hunter offers only last for the day of release, though.

Check into RuneScape each day for a little taste of festive cheer, and count the days until the most wonderful time of the year. 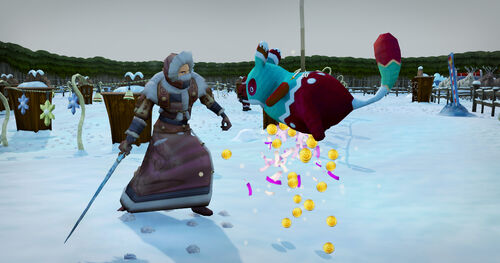 Also from 00:00 UTC on 1st December, lift your spirits with a very RuneScape Christmas race. Terrorbird racing is back - with a festive twist.

First, claim your free Reindeer Terrorbird 'mount' from Solomon's Store (or rustle up the one you claimed in April this year) and head south of Falador to start.

Race a round trip via Mudskipper point, jumping through all the terrorbird gates in the best-possible time to beat your friends on the leaderboard, and earn Agility XP while you’re at it. Beat the course par time and unlock a special version of the mount with a glowing nose! 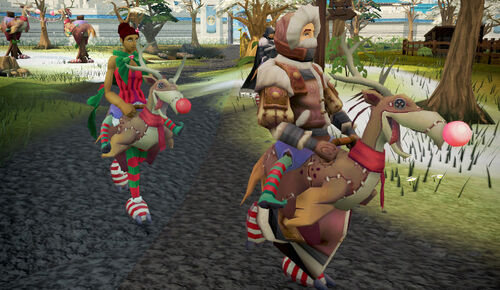 Winter Weekends are back, giving RuneScape members all the more reason to indulge in a spot of 'Scaping while the weather outside is frightful.

Each Winter Weekend begins and ends at 12:00 UTC (Game Time) on the days listed below. There are also Player-Owned Ports benefits, which last for over a week.

We have a couple of new additions this year: The Arc and Clue Scrolls. Read on for full details!

If you'd like more, you can also buy Keys on the website, or by clicking 'Buy Keys' within the Treasure Hunter interface in-game.