Araxxor is here, and he can't wait to tear you limb from limb in a solo or duo boss battle to the death!

When we polled the sort of boss content you wanted earlier this year, the message was clear: there's nothing you like more than grappling with a beefy combat boss.

Araxxor won't disappoint, as you choose your route through his lair, dodge hazards, and finally face the beast himself - on your terms.

There are regularly shifting layouts to the lair, and loads of amazing rewards - including level 90 two-handed weapons and creepily cute spider pets.

We've also integrated Twitch streaming into RuneScape, and spruced up the lobby.

Read on to find out more, or log in now and head south-east of Port Phasmatys to the Araxyte Hive.

Get to Araxxor's home by heading south along the eastern coast of Morytania from Port Phasmatys.

Once you're there, enter the Araxyte Hive and you'll find a webbed-over entrance to the boss-fight area.

Click on it, and you'll have the option to enter a non-instanced version, or to create/join an instance. You can also limit the instance to just one person, if you wish, or set a pass number to restrict access.

Note that only one person can enter the non-instanced version at a time, per world.

While there are no hard requirements to enter the lair (except any imposed when starting an instance) it's strongly recommended that you have at least level 90 in each of your combat stats, and the best gear that gold can buy.

As you battle Araxxor, you'll need to lure him through various areas of the Araxyte Hive. There are several routes to choose from - of which only some will available, changing every few days - and Araxxor will have different abilities depending on which route you take. 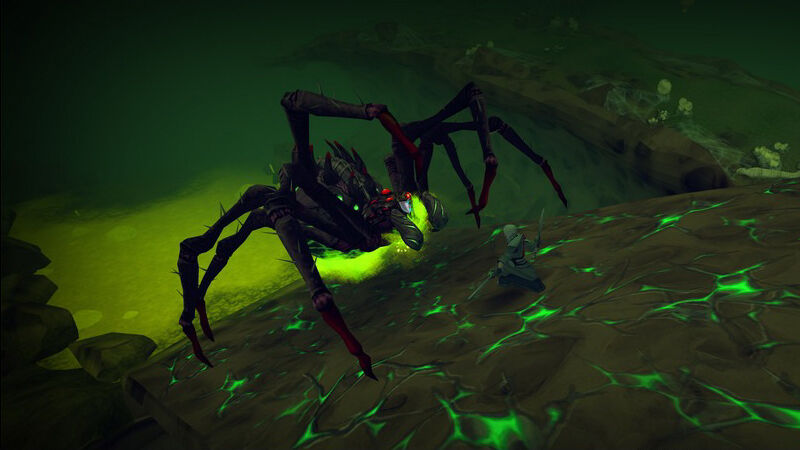 Araxxor's encounter is in your control - it's up to you how you choose to engage him. Moving through the paths and dealing with his mechanics will influence the difficulty and how the fight plays out. Experiment, and find your preferred spider-wrangling strategy.

There's no keeping a big spider down, either - each time you defeat Araxxor, he'll come back bigger, badder and angrier than before, for the rest of that day. As such, defeating him several times in succession will become gradually harder. The difficulty resets at 01:00 BST.

First among the amazing rewards on offer are level 90 two-handed weapons for all three combat styles: the noxious scythe, noxious longbow and noxious staff. These monstrous tools of destruction are the finest of their kind and come with new special attacks - they look spectacular, too.

You'll put them together by combining a spider's leg, plus one of three arachnid body parts received as rare drops.

There's a terrifyingly cute spider pet too, also obtainable as a rare drop. Once you have it, you can unlock new versions the spider as well, by completing special achievements while fighting Araxxor solo. Click on the cocooned corpse outside Araxxor's lair to find out more.

Both of these are part of a lucrative drop table - designed to be more rewarding even than the QBD. Taking down Araxxor is no mean feat, but it's certainly worth your while.

Note that if you're fighting as a pair, you'll each get your own loot. There is no competition over drops.

We can't wait to see you face Araxxor. To give you a chance to tackle him on your own, our wiki will include no detailed information on Araxxor's mechanics until the 11th of August 2014.

Fight hard, and join the discussion on the forums.

With the release of Araxxor, we've integrated Twitch streaming into the RuneScape interface. With a click of a button, you can now broadcast your RuneScape experience on Twitch.tv, with no need to run anything else in the background.

First, you'll need a Twitch account. Set one up - if you haven't already - and log into it via the Twitch tab in the Community interface.

Then enter a stream title, select your stream resolution and bandwidth cap, decide whether you want a microphone and/or webcam enabled and you're good to go.

The interface also allows you to quickly open the most popular RuneScape Twitch streams, and a new moveable window lets you chat with your own Twitch viewers while you stream.

Be careful not to push your streaming settings too high for your connection and computer to handle. Try lowering your graphics settings and resolution if you have trouble.

For help getting started, take a look at our video guide:

Start streaming now, and have fun!

Mod Drew and the RuneScape Team

The RuneScape lobby has received a fresh lick of paint this week.

Firstly we've brought its visual style in line with the rest of the RuneScape website. It's bigger, clearer and more readable than ever before, with essential functions easily accessible. You can also nominate an additional favourite world.

On log-in, you'll land on a 'welcome' screen, where you'll be presented with the latest and greatest RuneScape content - handy if you've been away from the game for a time.

Let us know how you get on with the new, spruced up lobby system over on the forums.

Mod Roy and the RuneScape Team