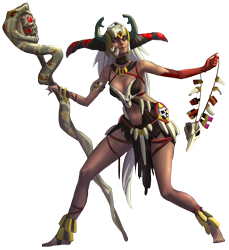 Mami Rimba, a known associate of Papa Mambo, has developed the means to make lethal crossbow bolts from the terrible timber of bloodwood trees, which grow only in areas that have known death.

Three trees can be found deep within the Wilderness, and offer greater yields of logs the farther in they're found. Another three can be found in areas opened upon completion of high-level combat quests, but you won’t get as many logs from these as you will if you brave the Wilderness. You’ll need both 85 Woodcutting and 93 Fletching to make the bolts, as the logs (as well as unfinished bolts) are non-tradable and will disintegrate if taken too far from the tree, so they must be fletched nearby. Abilities or items that automatically bank logs (such as an imp-in-a-box) won’t work, either.

With a ranged strength of 125, these bolts pack a punch in PvE, but it’s in PvP against mages that their insidious power comes to the fore. When bakriminel bolts are equipped, the styles in your Combat Styles tab are replaced by three areas of your victim’s body that can be sought out by the bolts – head, torso and legs. Whichever of these you have selected, you’ll hit as hard and as fast as if you were using the rapid style of your crossbow, but if you’re targeting a player wearing mage armour (or no armour) in the corresponding slot, there’s also a chance to inflict a nasty status effect with each hit:

Bloodwood trees take some time to grow back once cut. What’s more, the bolts don’t drop to the floor once used, and can’t be collected by Ava’s equipment. It’ll take skill and courage to create these bolts for yourself, or the money to purchase a ready supply from others. Nevertheless, for the not-so-squeamish ranger with a wizard problem, these vicious bolts are just what the witch doctor ordered.