The Nexus (members only) 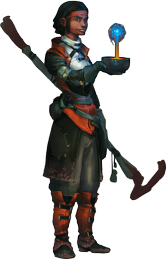 There's something big, dark, and slimy emerging from the murky depths of Lumbridge Swamp. The nature of this strange entity is unknown, but what it does mean is an awesomely social Prayer-training method aimed at low-level players!

Members will be able to head over to Lumbridge Swamp and help the druid Ysondria channel elemental forces with the sheer force of faith, stemming the tide of the corruption and earning plenty of Prayer XP in the process. There's also a chance that the horror will show its ugly face, and you'll be able to earn more XP sending it back where it belongs.

There'll be a finite amount of Prayer XP that you can gain from this training method, but it'll be enough to get a new player from 1-40 and over that first levelling hurdle with the minimum of chicken bone burial. For everyone else, it'll be a fun way to pick up a nice chunk of Prayer XP in a really cool-looking area while chatting with your friends.

We've also got a fantastic update for lore fiends among you this month, where you'll learn more about your favourite RuneScape gods and earn some awesome rewards for pledging your allegiance.

Following the events of The World Wakes, the RuneScape gods are coming back with a vengeance. Eight new NPCs known as the God Emissaries will be making their voices heard, and they'll be looking for you to join their cause. Each emissary will be speaking in favour of a god, and will give you a full account what their god represents, what the god in question has been up to since the establishment of the edicts, and what you can do to show your support.

You'll be able to join any of the eight factions they represent: if you favour serenity, freedom and a strong, noble outlook, perhaps you'll pick Armadyl. Do you thrive in chaos, continually reforging yourself in the fires of calamity, each time stronger than before? Zamorak's your guy. If you think Guthix was right, and that the gods should mind their own business, then the new Godless faction might be for you!

Whether you're a free player or a RuneScape member, you can align yourself with the faction of their choice, earning a title and a wieldable standard to display your choice. Members can also complete combat, skilling and exploration objectives for their chosen emissary, earning XP, improvements to the battle standard such as combat and skilling buffs, and a new helmet with level 60 hybrid combat stats.

Farmed and Dangerous (members only)

High-level farmers among you will get your green fingers on 10 new plants this month. Their level requirements will range from level 76 to 96, and they'll make use of less-used plots like hops, flowers and allotments, so they'll be a great help on the way to 99.

They come with a bunch of other great benefits to boot, including opportunities to get XP in other skills once they're grown. Steal the fruit from the jaws of a Venus fly trap, for example, and you'll be able to eat it for a chunk of Thieving XP (just mind your hands!) or pull up sunchoke tubers for some outdoor Strength training. You'll also be able to use your Construction skill to build grape vines, and then grow grapes and make god-themed wines, which can be used to enhance god brew potions.

With all this - and more - coming to the Farming skill, it's going to be a blooming good spring!

As an extra on one of the above update weeks, we'll be performing some maintenance on the Bonus XP system. There are loads of different items in RuneScape that can boost your XP gain from skilling or combat training, and it's high time we brought them all together under the same roof.

From this update, the bonus XP you're entitled to will be given under the same system as the Recruit a Friend scheme. Most of the changes here are going on under the hood, and are meant to help us in future development, but one big thing you'll notice is that many of these items will no longer need to be worn to access the bonus XP linked to them - so you'll be able to wear an amulet that gives you a combat bonus rather than your usual XP amulet, for example.

We've got some cool stuff coming to Solomon's Store and on the Squeal of Fortune, with dragon keepsake keys for weapons and a bunch of amazing new PvP death animations coming up, as well as the superbly spicy 'Fiesta de Guerreros. For those of you looking to treat yourself to some new cosmetics, the future's bright and sunny.

The RuneScape Beta Programme got off to a grand start last month, with loads of you logging in to try the HTML5 client beta and the alpha version of the New Interface System, and sending us tonnes of amazing feedback. We're working hard on fixing the first round of bugs and performance issues, but we'll be shifting the programme up a gear later this month, expanding our group of selected testers and - after that - open up both the HTML5 client and NIS to all RuneScape members for testing.

Keep the feedback coming - it's your thoughts, requests and observations which will make RuneScape 3 the game you want it to be. If you haven't been able to try the new features yet, don't worry. You'll get your chance soon, so keep your eyes on the news!

That's it for May. Enjoy the springtime sun, let us know what you think about the above and - most importantly - have fun!