It’s not the Summer of Love this year - it’s the Summer of Decapitations and Giblets! Legacy Mode beta, a Bandos-themed combat quest, explosive skillchompas and an amazing membership offer mean that this summer will be a real blast.

Legacy Mode is a way of playing the modern game but with a traditional look and feel, without the need to learn the new combat system. It includes the old resizable and fixed-window interfaces, ability-less combat and life points back to a max of 990 - all while allowing access to the latest RuneScape content.

This update is more than just Legacy Mode though. It comes with improvements to all combat modes: the reintroduction of Special Attacks, critical chance reverting to strength bonuses and a return to the ‘138’ combat level formula - as voted by you earlier this year.

As you get stuck into the beta, we'll be listening to your feedback to make sure you’ve got the best of both worlds.

With Legacy, we want to offer a combat mode that will be immediately recognisable to those who didn’t get along with EoC, so help us by getting involved with the beta once it’s available.

Our newest Master quest, The Mighty Fall, pitches you into a tournament on Yu'biusk - fighting in Bandos's name.

Zanik, Bork, General Graardor and others are all involved, and all have stakes in the outcome of the battle. It’s here that the goblins, trolls and ogres hope to find a new purpose, and perhaps a new leader.

The quest's bursting with boss battles, each pushing you to the limit. You’ll have to master your melee skills and a brand-new two-handed weapon.

The requirements are mighty. Ready yourself for mortal combat with the following:

Yelps will be taking part in this game of death, thanks to your votes in the Power to the Players poll. Will he be fortunate, or will you send him squealing to the Underworld?

Skillchompas are furry skilling bombs to be used when training Mining, Fishing, Woodcutting and Divination! Just throw them at your chosen skilling spot and get ready to reap the rewards.

They're caught with box traps - same as chinchompas - and require Hunter levels ranging from 27 to 89. When used, they will give you +10% base XP in that skill, an increased chance of skilling success, and a higher chance of an enriched memory from wisps.

Just don't look into their sad skillchompa eyes as you throw them - they want to explode. Honestly.

The Road to Elf City and Elf Graphical Improvements

The gates of Prifddinas - the Elf City - open this autumn, and skilling up to earn entry is quite the journey. 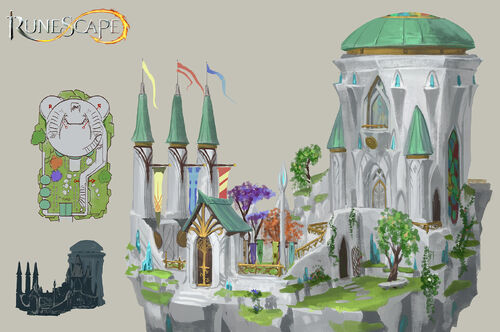 Take advantage of our Summer Special membership offer and get an XP-boosting aura, and a crystal amulet awards bonus XP in the necessary skills.

The amulet can also fill your pockets with elder tree seeds and crystal motherlode shards - resources that will be useful once Prifddinas opens.

All this comes with three months' membership at up a 25% discount, or for just five Bonds. Visit our Summer Special page for more details.

Note that if you're a 12-month-long member or Gold Premier Club member already, you'll have received the aura and amulet at no additional cost.

To get into the Elf City, you will need to complete the elf quest series, including the upcoming Grandmaster quest: Plague's End, which is coming in a future month.

In preparation, we'll be giving the elven environments a wonderful, crystal-like sheen this month. This includes the Underground Pass, Lletya, the Iorwerth Camp and Temple of Light. Isafdar has never looked so good.

The skills and quests that will be required for this summer's Elf Quest and City are:

Improve those skills, complete the quests and get on the road to the Elf City!

If you haven't already, be sure to take a look at our Elf City design documents, and listen to our podcasts. Keep an eye on the news for more details of the journey to Prifddinas.

Solomon's got some striking new apparel in stock this month. You'll intimidate others with the Vyrewatch and Aviansie outfits, and there's a movie-monster vibe from our Animation Team Showcase, including Frankenstein, Wolfman and Mummy teleports - available in short and long versions.

There's room for a new item, too: the Spring Cleaner. It breaks down certain unwanted drops, either sending their components to your bank for use when skilling, or granting you bonus XP.

Fight hard in the tournament, grab a skillchompa, get involved in the Legacy Mode Beta and prepare for an elf-obsessed summer.

This, however, is only a plan - not a promise - that a particular update will be released in a particular way or at a particular time. To get you the highest quality updates as quickly as possible, we usually keep on tweaking and testing right up until the moment before release, so sometimes things change or take a bit longer than expected. We aren't afraid to change our plan if necessary, as we will never launch an update before it is ready.
Retrieved from "https://runescape.fandom.com/wiki/Update:Behind_the_Scenes_%E2%80%93_June_2014?oldid=10723467"
Community content is available under CC-BY-SA unless otherwise noted.