Rumours are rife that the Easter Bunny has met with a nasty accident, and the Evil Chicken and Chocatrice will be facing off in the most deliciously wicked Easter egg hunt ever. If you’ve no qualms about getting your hands greasy or chocolatey, you’ll be able to take charge of an Eggsterminator and eggsplode a reign of eggy terror (or batter them- fried chicken style) during the Easter period. Come out of your shell and work with your friends to hunt down Easter eggs in the name of your eggstremely evil Easter mastermind! Free players and members alike will have the chance to pick up some shame-faced eggy masks, and members can grab XP lamps and a permanent version of the Eggsterminator for performing particularly well.

There’ll be plenty of community-led events based around Easter this year, so keep an eye on the news and the forums for further details.

We’re releasing a bunch of much-requested updates and fixes this month, most of which relate to Dungeoneering.

First up, we’ve added a tool belt for use in Dungeoneering. Much like its surface world counterpart, this will automatically be filled with all basic tools, as well as a novite pickaxe and hatchet. You’ll also be able to add higher-level tools to your Dungeoneering tool belt when you find them, effectively allowing you to carry around the best pickaxes and hatchets you can without costing you inventory space.

Keys will be automatically shared between all party members. When any player picks up a key, everyone else in their party will have access to it through a new “keys” category in their Dungeoneering tool belt. Gone will be the days where a key gets lost in your teammate’s inventory, because as long as someone’s picked it up, everyone will be able to use it.

Basic resources found in Dungeoneering, such as ore, logs and raw food, will stack, meaning more capacity for the eager artisans in your party. All stackable resources, as well as coins, will also have a “Drop-X” option, allowing stacks to be split.

Finally, we’re making some other non-Dungeoneering improvements, such as allowing additional Crafting and Fishing activities the chance to drop Shattered Heart rocks, and allowing for vampyric names earned during The Branches of Darkmeyer to be changed. 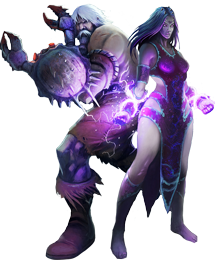 We’ll also be releasing two new, exciting Fremennik Sagas. The first carries on from where Thok and Marmaros’s adventures in Daemonheim left off. Thok’s left his favourite sword lodged in the face of a bony bad-guy who won’t stay dead. To make matters worse, he’s just been challenged by Marmaros to a battle of brawn, with kill-counts the deciding factor. THOK SMASH! Step into Thok’s boots and battle your way through the dungeon fists-first, meeting old friends and enemies on your quest to prove Thok the best brother. THOKTACULAR!

The second saga follows the mysterious Moia as she infiltrates Daemonheim in search of the elusive “Bill”. You’ll use her unique powers to masquerade as dungeon denizens, from a necrolord to an honest-hearted mercenary captain, and to delve deep into the secrets of Daemonheim’s origins.

Finally, we’ll be introducing a fun new Runecrafting training method, allowing training all the way from 1-99!

Wizard Finix has been hard at his research investigating a plane discovered by the Runecrafting Guild – called the Runespan - where runes can be pulled from wild, elemental nodes, or even from the native wildlife. You’ll be able to traverse the floating network of islands that make up the Runespan with magical platforms installed by Runecrafting Guild pioneers, collecting runes and helping hapless wizards who’ve become stuck, all for bags of Runecrafting XP.

Members have access to three separate areas within the Runespan, each aimed at an increasing level range. Free players only have access to the lower level area, but it’s still a great place to train up.

The Runecrafting Guild will lay claim to any runes you earn in the Runespan, but – for members - they’ll convert them to points which can be exchanged for some fantastic rewards. These will include a set of wicked robes, which will permanently increase the capabilities of the wicked hood when purchased; some new, magical staves; and a pouch with a huge capacity of 18 essence!

We’ll be adding some ways to get extra spins on Squeal of Fortune simply by playing RuneScape, including some opportunities exclusive to members. You'll be able to get them as monster drops, through non-combat skilling, through D&Ds, as quest rewards, and more!

Behind the scenes is a sneak peek at the planned game updates which we hope to launch in the coming month.

This is, however, only a plan, not a promise that a particular update will be released in a particular way or at a particular time. To get you the highest quality updates as quickly as possible, we usually keep on tweaking and testing right up until the moment before release, so, sometimes, things change or take a bit longer than expected. We aren’t afraid to change our plan if necessary, as we will never launch an update before it is ready.
Retrieved from "https://runescape.fandom.com/wiki/Update:Behind_the_Scenes_-_April_(2012)?oldid=20577778"
Community content is available under CC-BY-SA unless otherwise noted.