Occasionally in life, you face a choice so monumental that it changes you forever. This April, we bring you one of those choices:

Are you a monkey, or are you a cabbage?

That's right - Brassica Prime and Marimbo are coming in April, in the mysteriously titled Cabbage Facepunch Bonanza - the Sixth Age seasonal event voted for by you.

There's also some fantastic dressing to April's salad, with a new quest that sees you return to the island of Ashdale; the ability to harness Elder God divination energy; and several updates from the Ninja Team, including Ranged and Magic power gloves.

Read on to find out more!

Marimbo and Brassica Prime have come to Gielinor, and they've claimed the abandoned Saradomin camp, north of Lumbridge Crater. In the red corner will be Marimbo, fighting for fun and partying, and in the green corner will be Brassica, who wants to bring deliciousness to the world.

In a recent poll, you voted for a lighthearted seasonal event focused on the Sixth Age conflict between the gods, rather than a traditional Easter event.

This spring, there's cabbage galore and apes aplenty - and not a bunny in sight - in the Cabbage Facepunch Bonanza!

After choosing a side, you'll be rolled into an underground obstacle course of traps, trophies, monkeys and madness. Your aim is to survive as long as possible, collecting trophies and avoiding players that have been transmogrified into face-punching gorillas. Obviously.

Pitch in and you'll earn renown, which can be spent on cosmetic capes or bonus XP in Slayer, Farming and Mining. You'll also be able to buy three rewards, each voted for by you: seedicide, which converts dropped seeds directly into experience; the Slayer VIP ticket for more choice in your assignments; and the patch bomb, which makes harvesting and clearing your farming patches a breeze!

There are no requirements to play this new minigame, although members will gain renown at a 50% increased speed.

So - are you a Brassican, or a Brassican't? Are you a chest-pounding silverback, or just a brass monkey? All this - and more - will (probably) become clear in the Cabbage Facepunch Bonanza.

A shadow has been cast over Ashdale, the idyllic starting area of RuneScape. In our latest quest, take on fiendish puzzles, all-new enemies, and a story that is overrun with intrigue and danger. There are no entry requirements, so the quest is suitable for new players, but the NPCs are scaled to your level, so experienced players can have a blast too.

We’ve taken a different approach with this quest, keeping it light on dialogue and letting the environment and set pieces do the talking. From concept to modelling, animation to environment, the art and graphics guys have produced some inspiring work. We can't wait for you to visit the imperilled Ashdale and tell us what you think! 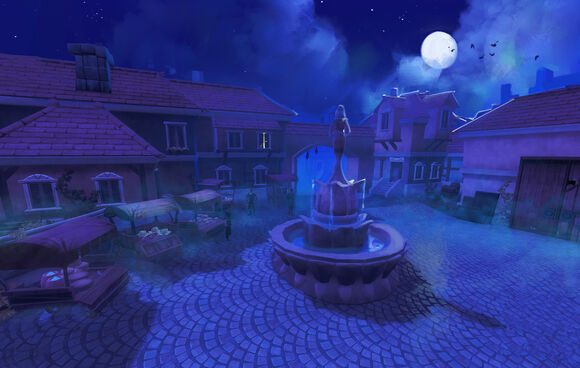 April brings a tasty treat for those who have completed Fate of the Gods - a new divination colony. While this is a nifty alternative training method between levels 75 and 85, it's all about what you can do with the elder energy that you gather there.

With it, you can make a new divine location - the divine simulacrum - which will allow you to gather divination energy from various tiers at once, as well as the occasional portent and sign. There's Transmute Charm, which can convert your gold charms into green, your green charms into crimson, and your crimson into blue. And there's the divine impling, which will give you energy, signs and complete summoning pouches if you manage to grab it.

Among the various Divination additions across levels 75 to 99, we will be bringing you the muspah beast of burden. This was voted for by you in a Power to the Players poll, and we've made sure it's a real helping hand as you unravel divination's mysteries. It will auto-store and auto-deposit your energy, so you won't even have to click it to gain the full benefits. We've also given it a nifty energy-foraging scroll ability.

There will be plenty for those who have not completed Fate of the Gods too. Many rewards are tradeable and can be bought from other players, and we're completely revising the way chronicles work, so you will find them more frequently, get more XP from them, and cash them in when you want to.

Master Skillcapes and Other Ninja Updates

The ninjas have done it again this month, bringing you what you want, when you want it. Aside from their regular fixes, you can expect master skillcapes, recognising the achievement of gaining the equivalent of level 120 in a skill. Don't worry, we won't be increasing the max skill level with this update.

The ninjas have also cooked up some level 90 Ranged and Magic power gloves. These will drop from members of the Order of Ascension and celestial dragons respectively. Every combat maestro will want to get their mitts in these!

Those of you who followed the player-designed emote competition will recognise the 'RuneScape Through the Ages' emote in Solomon's Store. It features iconic items from throughout RuneScape's history, and we had great fun reminiscing as we made it. You can also expect some brand new companion pets in Solomon's Store, and items that'll transmogrify you into a bunny, lamb or chick on Treasure Hunter.

Finally, we would like to apologise for the delay to the bank changes. The good news is they're coming this month, and to make up for it, we're including a hefty addition that will make you weep actual tears of joy. We're giving you quick loadouts for your worn inventory and backpack, so you can grab a group of items from your bank in the swiftest of clicks!

That's it for this month. Don't forget to jump onto the forums and tell us what you think.