To celebrate this fantastic time of year, we've filled your plate with wintery weekends and a funky festive aura, which will complement the quest and minigame meat like a tasty sauce. Anyone who signs up for membership over December will be given an aura which, when activated, will add a 50% bonus to XP gained within the next 30 minutes. It also gives you a set of wings themed around snowflakes. In addition, we're hosting a variety of special weekends over December, giving double boss drops, double XP in certain skills, double Dungeoneering tokens and even a special snowman-themed community event. It’s going to be a great month, so get involved!

TzHaar Grandmaster Quest: 'The Brink of Extinction' – Members Only

In this Grandmaster finale to the TzHaar storyline, you'll be asked to resolve the differences between the Ga'al, TzHaar and TokHaar by using a fiery combination of wits, knowledge and the sheer, unbridled potency of the new combat system. You’ll have to fight your way through waves of vicious foes and burn through tricky puzzles, as you march forward to the ultimate goal – bringing the city back from the brink of extinction. With fantastic graphics, voiced characters and full integration with the EoC, it’s the flaming hot action we’ve all been longing for.

As with any Grandmaster quest, the rewards are particularly awesome. Not only are the XP rewards some of the biggest we have ever awarded, we'll allow you to smith obsidian armour (particularly useful when fighting volcano-dwelling critters), and unlock a brand new single-player combat training area. 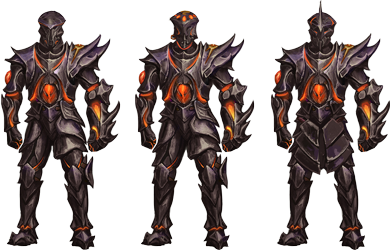 Requirements for the quest are as follows:

If your allegiance tends towards the TokHaar, Solomon will have three tiers of cosmetic armour reskins for sale, based on the ancient race.

I first mentioned the idea of Player-Owned Ports at Runefest last year, and it’s something we’ve been working hard on ever since. This month, after months of plank-walking, kraken-dodging and sail-hoisting, it’ll be ready! Arrrr! That it be!

Player-Owned Ports is a massive minigame where you can build and manage the port, your ships and your crewmen - ships, sailors, captains and adventurers - and explore the realm of the Eastern Lands!

Building the port itself is a simple matter of creating and upgrading buildings by using the resources your pirates traders bring back from their exotic adventures. The better your port, the better the shipmates you attract to your fleet. The strategy lies in equipping and preparing your ships for any eventuality, finding the right crew for the job and choosing the right voyages to undertake. And there are HUNDREDS of voyages that occur in real-time, meaning you can go back to the surface world and go about your normal business while your crew do all the hard work. 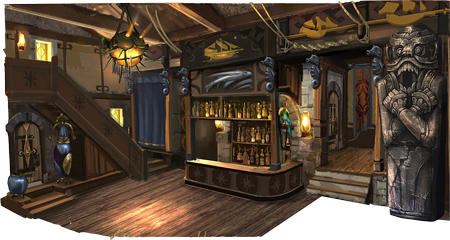 Accessing the port requires at least level 90 in one of the following skills: Herblore, Prayer, Runecrafting, Thieving, Slayer or Fishing. Each skill attracts a different adventurer, who has their own deep, mysterious storyline to investigate, unlocking more and more of the fabled Eastern Lands. If you want to explore ALL of the content that the ports can offer, you’ll need at least level 90 in all of those skills.

There are heaps of new rewards to be accessed as your crew brings back the rare and elusive items of the eastern archipelagos. There are so many rewards, in fact, that we can only give a taster here:

New level 85 equipment for rangers, mages and warriors. These need to be crafted, runecrafted or smithed by players with 90+ in those skills A brand new, 'highest-healing-ever' food type (90+ Cooking to cook) New scrimshaw items that can be carried in a brand new 'pocket' slot, offering a range of skilling and combat benefits (90+ Fletching to make). Of course, no update would be complete without some fantastic new graphics and audio, and the ports have those by the barrel load! Not only is it fully voiced and features some fantastic shanties (look out for a special shanty in an up-and-coming video) but the Graphics team have really pushed the boat out with some amazing buildings, ships and characters, all of which really bring the update to life.

A Stray in a Manger – Free and Members 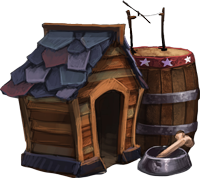 The poor old Varrock dog has had it bad for the last few years, and this Christmas you’ll have the chance to turn his flea-bitten, mangy life around! In a special update more akin to the Christmas events of old, you’ll be able to clean up a pack of stray dogs, build a permanent kennel in your choice of RuneScape city, and turn the dogs into a pack of Christmas reindeer, all geared up to help with Pet Christmas.

There will be plenty of special RuneScape presents available for those players who get involved with a RuneScape-wide game of Pass-the-Parcel. In this Christmas variant, you'll find Santa beards and sacks, and plenty of god-themed accessories for your kennel, including Zaros chew toys and a Guthix flea circus! That's right, the fleas get re-homed too, and they get to play with high wires, flaming rings and unicycles.

Christmas is a great time of year to enjoy with your friends and family, so we are making some changes to our 'Refer a Friend' system, offering you extra rewards when introducing RuneScape to others.

Santa will also be crash landing this month, scattering presents across Gielinor for marauding monsters to pick up. Defeat the creatures, collect the presents and return them to Santa to be rewarded with gifts of your own, with greater prizes for those who find complete sets of certain present types. Yelps will be getting in on the act, so you'll have an alternative method of gaining presents on the Squeal of Fortune.

The stray dog has had a profound effect on the RuneScape team - so much so that, this month, we’ve been taking a look at the way pets function in the game. We wanted to improve the interactions between master and pet, so we will make a few changes to encourage more players to find a cuddly (or ferocious) friend for Christmas. Most noticeably, we are removing the need to feed or carry your pets, since they will be accessible from the new customisation interface.

We are also adding two brand-new, re-colourable and re-nameable pets to Solomon’s store, each with their own unique set of powers.

For our final update of the year, we're adding a new monthly D&D that could earn you Construction, Slayer and Prayer XP. Simply put, you'll be able to build statues dedicated to a variety of gods by solving puzzles based around an ingenious mix of physical scaffolding and code-breaking gameplay. Sound strange? Not as strange as the sculptor who's designed the holy landmarks dotted around the world. It's available to players with any Construction level, and is all set to end the year with a real bang.

Have fun...and here’s wishing you a most excellent Christmas from myself and the RS team.


This, however, is only a plan; not a promise that a particular update will be released in a particular way or at a particular time. To get you the highest quality updates as quickly as possible, we usually keep on tweaking and testing right up until the moment before release, so sometimes things change or take a bit longer than expected. We aren’t afraid to change our plan if necessary, as we will never launch an update before it is ready.
Retrieved from "https://runescape.fandom.com/wiki/Update:Behind_the_Scenes_-_December_(2012)?oldid=9777616"
Community content is available under CC-BY-SA unless otherwise noted.