This month is all about your suggestions! 'Can we have these features?' you asked. 'Can you do something cool with the Barrows Brothers?' Oh boy, have we delivered…

This month we'll be adding a brand new way of tracking the important daily, weekly and monthly Distractions and Diversions all over RuneScape. Gone will be the days of wondering when you can next go and raid a sinkhole, thwart troll invasions, build statues, chop down an evil tree or perform amazing feats of acrobatics at the circus - just check the D&D Tracker!

This new tracker can be seen in the Adventures interface on the Minigames tab. You’ll be able to see quickly which activities you can replay now, or how long it will be until they reset. You'll even be able select your favourite D&Ds and keep them together in one handy list!

As a launch-week treat, we will be handing out daily rewards in the form of replay tokens which you’ll be able to pick up from the challenge Quartermaster in Burthorpe. Each day you’ll be able to earn a token to reset a daily activity of your choice, plus a random replay token for one of the other glorious D&Ds!

It’s something you have suggested as an in-game feature for a while now, and - as you know - we are keen to give you exactly what you want. Hopefully that will give you a few less things to worry about while taking on those vicious Barrows Brothers.

Talking of your suggestions, we’ve been busy combing the forums, fan sites, YouTube, and wading into the primordial soup of creation to find a fantastic bunch of improvements to the game. These are all things you’ve told us are important to you… so we’re adding them to the game.

This list really is huge, but here are some of our favourites:

We will also be making a large improvement to the Coinshare System. We're making these changes because the current system is forcing the price of certain items to behave differently than the “real” market, and we're confident that our upcoming changes will solve these economic issues. Stay tuned for more information!

We are also making some big upgrades to the world map. We know it’s sometimes slow and difficult to use, so were making it faster to load and more responsive. We’re also adding some new region labels to help you find the content you’re looking for!

Barrows – Rise of the Six

In the past, we have gone back and revisited older boss monsters - graphically improving them, adding hard modes, refreshing drop tables - but we decided none of that was enough for our favourite and most replayed bosses in the game. They deserved something bigger, badder, tougher - something worthy of the brothers. And Sliske was happy enough to oblige. 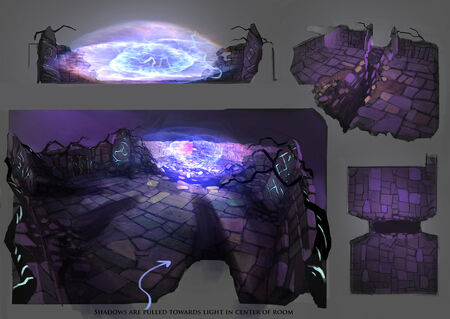 Since the start of the Sixth Age, Sliske has been busy playing with his new-found powers. Tinkering around with the Shadow Realm is fine for a hobby, but after irritating Gielinor’s most powerful beings, he’s in need of a little more muscle. Lucky for him, then, that he's got Gielinor’s finest Third Age warriors on his side.

Yes, that’s right. The Barrows Brothers are back - tougher than ever - and this time they're working as a team, waiting to take on groups of four adventurers hungry for a beating! They have a wealth of new abilities, tactics and a truly horrifying new capacity to deal damage. To keep things interesting, the brothers fought every day will change; meaning you'll have to stay on your toes and adapt your tactics . You didn’t think it would be easy, did you?

Rewards for this brutal exchange of might vs wight include full set of deliciously spiky level 90 melee power armour. You’ll also be able to earn fantastic new level 90 shields for all three combat types - check them out below!

In a strange twist of fate - no doubt caused by some strange combination of Sliske's magic and some graphics artists who like a challenge - we’ve even managed to create a range of strangely cute barrows pets. Look forward to them terrorising your local bank soon!

Just in case you wanted to look pretty while visiting Death, Solomon’s got a few new items to cheer you up! Wrap yourself up in a timelessly stylish mummy outfit, don two new showpieces from our talented artists -the Ogre Infiltrator and Drakewing (complete with awesome wings) outfits - and coo at the cuteness that is our unicorn companion pet, as requested by you on the forums.

This, however, is only a plan - not a promise - that a particular update will be released in a particular way or at a particular time. To get you the highest-quality updates as quickly as possible, we usually keep on tweaking and testing right up until the moment before release, so sometimes things change or take a bit longer than expected. We aren't afraid to change our plan if necessary, as we will never launch an update before it is ready.