We're trying something different than a predictably spooky Halloween offering this year by putting an exciting new twist on the October holiday event. Add new trees, an awe-inspiring Sixth Age quest and level 90 ranger gear into the mix and you’ve got an update month that'd cheer up even Death himself!

It’s the first ever rebuildathon! Since the explosive encounter between Saradomin and Zamorak, Lumbridge has suffered horrific damage to its once-majestic castle and surrounding walls. A group of local builders, led by Foreman George, have decided to do the right thing and rebuild it.

Naturally, they'll need a community of hardy adventurers to help them dismantle the abandoned war camps and reclaim the materials needed to fuel the reconstruction effort. Absolutely everyone will be able to join in, earning XP, an emote and even a unique costume from around Lumbridge: Explorer Jack's hat. There's a title for members to earn, too.

You’ll be able to see the collaborative effort of the players in full effect as the camps are broken down and buildings slowly raise from the ground, so make sure you get involved and help rebuild the home of RuneScape.

As a special, one-day event during RuneFest, players and RuneFest visitors will be able to build something special to pay tribute to the brave warriors who lost their lives during the Battle of Lumbridge. But that won’t be till November - look out for information next month!

Tired of chopping down magic trees? Irritated by ivy? Feel like smashing the sawmill to splinters? If that sounds like you, then worry not, for there are two brand-new trees for the most worthy of woodcutters to branch out to this month.

Elder trees (accessible at level 90 Woodcutting) can be felled for rare elder logs, which are used in a variety of skilling activities. Make new elder shortbows and shieldbows (level 60 - or 65 with a sight - to wield) with your Fletching skill (level 90 and 95 respectively) or even burn them (level 90) for great Firemaking XP. You’ll be able to sell them too, of course, which will be a great new way for woodcutters to earn precious GP.

Crystal trees can be chopped by level 94 woodcutters. These trees can never be fully cut down, but the crystal formations that sprout up around them give the best Woodcutting XP rates in the game when shattered! You’ll need to hunt them down, though. There are a few nice surprises for elven-eyed players to spot along the way, and the chance to break off a crystal geode, which can contain valuable gems, crystal seeds or crystal triskelions.

Both of these trees act slightly differently in-game, so new tactics and collaborations will need to be created to get the most out of them. We've also increased the level of the dark bow to 70 (and its stats accordingly) so it's still the best shieldbow in RuneScape.

We mentioned a few months ago that we would be introducing new higher level ranger armour to the game by adding craftable materials to some existing drop tables. This month, we’re proud to introduce sirenic armour.

Added to Slayer monster drops between level 78 and 95, sirenic scales will be dropped with varying levels of chance, the lowest from aquanites and the highest from the fearsome Ascension legios. Craftable by level 90-93 crafters and stitched together using unique thread from Ocellus himself, this is the first level 90 gear to be dropped by non-bosses and will include head, chest and leg power armour. It looks great too, so bow down to its awesomeness! 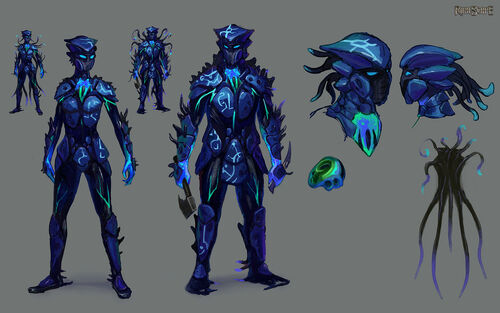 This quest is something I’ve particularly been looking forward to releasing into the game because it starts one of our most important storylines for the Sixth Age. It starts mysteriously, with a foul murder, cryptic messages and the appearance of strange - yet familiar - faces, but truly, this is just the beginning of something truly epic.

Death - the Grim Reaper - has gone missing, and Icthlarin - God of the Underworld - is attempting to fill the void he's left behind. At any other time, Icthlarin might have managed, but there has been a massacre in the hills near Paterdomus Temple, east of Varrock. Icthlarin cannot hope to keep up, and the spirits of the dead remain tethered to their corpses.

This is where the player comes in. Their first task is to find out who perpetrated this massacre. Then it's time to find out what Death has been up to. Has he been Deathnapped? Or is he taking a welcome break after the death of his god, Guthix?

This mystery takes many grave twists and turns, and goes far beyond your traditional whodunnit. It's resolutely 6th Age, so expect several gods to feature as the mystery of Death's disappearance is unravelled. You'll get to meet and work with Icthlarin; engage with fully voiced, famous characters; explore large, graphically lush environments; and earn unique, high-level rewards and death animations!

Woo woo, woo woo woo woo. If you’re not wearing your ghostspeak amulet but you’re rattling chains and screaming out for your Halloween fix this month, then head to Solomon’s General Store! Two new music boxes (featuring new iconically 80s zombie dancing ) head the bill, alongside two new costumes, one with a distinctly skeletal vibe and the other with a goth look. We're bringing the newly non-combustible golden chinchompa back from the great beyond and offering it at no charge for members, or for a small Loyalty Point or RuneCoin price to free players. There are also some new loyalty items available in the form of “Battle of Lumbridge” outfits and a general evaluation of Loyalty Point prices on the store, following your feedback. Wooooooooooo!

Discuss this here.
Retrieved from "https://runescape.fandom.com/wiki/Update:Behind_the_Scenes_-_October_2013?oldid=9038328"
Community content is available under CC-BY-SA unless otherwise noted.