Start a Wiki
This Developer Blog is copied verbatim from the RuneScape website. It is copyrighted by Jagex.
It is written by Mod Porky and is dated 6 February 2014.
Data to the Players

Since the Power to the Players polling system launched we've seen just shy of ¾ a million votes cast, coming from over 215,000 players, ranging from level 4 skillers to completionist cape owners. In order to have truly community-driven content, we want to ensure that development is tailored to you: your skills, combat levels, playing habits and more. That's where I come in. As a game analyst (and long-time maxed player) I look into player behaviour and provide reports on how you engage with our content releases, enabling developers to make post-release tweaks or plan future content accordingly.

What does this mean for PttP? Well, for ease of reading, I'll break this into 6 sections, one for each of the currently finished polls:

Decide on Maps for a New Minigame

The winning vote for this poll was Canifis with 27.76% of votes.

If there are level requirements in a piece of content I'd now want to know the average levels of players who voted for Canifis:

As you can see here, the average voter on this poll had a a skill total of 1865, a combat level of 169 and 5 level 99 skills. To add another twist on things, when looking at votes from just very high 2200+ skill totals, Isafdar actually came out on top with 25% to Canifis's 22.8%. Isafdar - being the elven forest - likely had an increase of votes due to the Elf City vs. Invention poll running alongside it.

With elven content primarily aimed at high-levelled players, it's no surprise that Isafdar had votes to match. The Wilderness had the lowest skill totalled players, which suggests that those voters are PvP and combat-focussed - perhaps with pure accounts.

This one was more decisive than the map vote. Demons sped ahead and remained there for the entirety of the poll, winning with 57.5% of the votes.

We can see that there's an even spread of levels represented in each category. You don't see only low levels voting for ghosts, for example, or the average levels would have been much lower. That said, elementals did have the highest levelled players voting for them on average, although this is more due to the sheer volume of demons voters, meaning more lower-levelled voters present in that category. Higher-levelled players still voted for demons more than they did any other option. 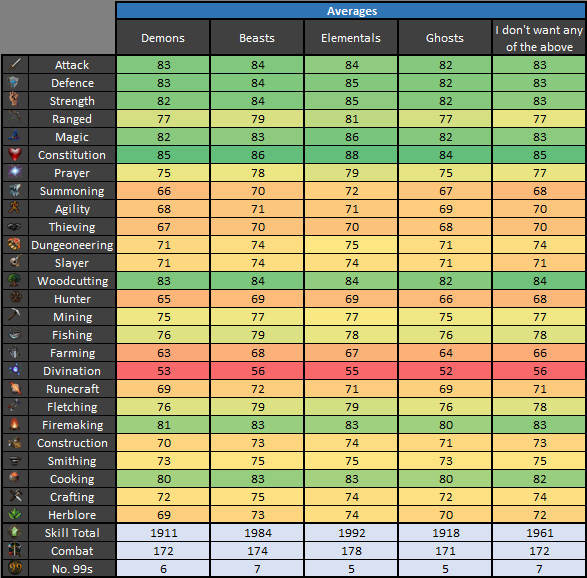 On average, the highest-levelled players fell into the I don't want any of the above category and we did see the number of voters nearly halve from the previous two polls. It could be that you simply aren't as invested in the outcome of this poll as the others, or that some of you weren't aware that a new poll was taking place. 62,000 players who had voted in a previous poll didn't vote in this one - perhaps we need to raise awareness when a new poll starts.

An interesting fact to come out of this was when looking at just the lower levelled (0 – 1000 skill total) and those with less in-game wealth, the gold dragon trumped the celestial dragon with 36% to 33% of votes. This is likely due to the description of the gold dragon dropping large sums of gold coins. It's good to know that voters are taking the descriptions into account and not just voting for the coolest name!

Brassica Prime and Marimbo came out on top with 65% of the votes. I had a hunch that longer-standing players who had experienced more of the traditional events might have had a higher percentage of Traditional Easter Event votes. I was proven wrong - how long you'd played RuneScape had no effect on your voting preference.

No one group had significantly more votes for Traditional Easter Event, be it combat, skill total, account age or any other breakdown.

The winning option was to keep them as they are, which got 37,500 (64%) of the votes. Generally, the higher-levelled (both skill total and combat) the player, the more likely they were to vote keep them as they are. My feeling is that there's a competitive aspect, in which reducing the number of worlds means less training spots for gathering and combat skills.

Invention Skill vs. The Elf City

Last - but by no means least - our first Dragonstone poll has ended. Over 156,000 of you voted, which resulted in the Elf City beating the Invention skill. As you can see, the voting was a lot closer in this poll than in the others.

Clearly, The Elf City has a lot of higher-levelled players backing it and needs appropriately high-levelled content, some of which we'll be polling this month. 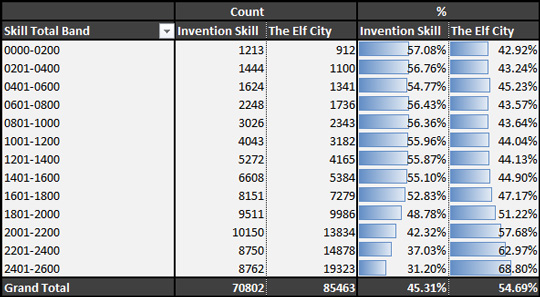 Players with only a handful of skills left to max also heavily voted in favour of The Elf City (not wanting to lose those max capes again so soon, are we?)

I think I'll wrap it up there. I know that reading up on data analysis isn't at the forefront of your minds when you come to play RuneScape, but I hope this was an interesting insight for you - both on what the community wants from the game, and on some of the methods we use to make that happen.

Retrieved from "https://runescape.fandom.com/wiki/Update:Blog_-_Data_to_the_Players?oldid=15411433"
Community content is available under CC-BY-SA unless otherwise noted.