Start a Wiki
This Developer Blog is copied verbatim from the RuneScape website. It is copyrighted by Jagex.
It is written by Mod Kelpie and is dated 10 July 2014.
Team 1 Team Blog 2

I return to bring you another dev blog from Team 1. We do these so that you can provide early feedback, which we can then use to improve the projects ahead of release. So please have a read through and leave a comment to let us know what you think.

Today we shall be discussing the Grouping System and the Make Runes More Valuable projects. We shall not be discussing the Combat Boss or the Elder God Quest however. As you may have seen in the BTS, the Boss is coming out sometime this month, whilst the quest is still in design and it is difficult to discuss it without spoiling the plot.

In the last blog we outlined the basics of the grouping system, shortly after the initial prototype work was complete. A lot has been added over the last month, and we're getting towards polishing and full on testing ready for release. Enjoy some extra details and some screenshots of what's to come!

Possibly one of the largest parts of the system! You will be able to choose content-appropriate settings so you get the game you're looking for. Dungeoneering for example will allow you to select the floor theme, complexity level, group size, minimum combat level and whether or not to enable hard mode.

As an added bonus, certain settings will be pre-selected. Continuing with Dungeoneering, the theme will default to the highest theme you have the level to play with floors unlocked.

At the same time we've also added base requirements for the content, so you can't join a group without pre-requisite levels or quests.

This one's more for newer players who may not know about the content. Whether it's showing the items General Graardor drops, or giving some information on what Dungeoneering Tokens can be spent on there's some useful information available.

Don't know what to do? There's also a button to find a group for any content, which aims towards the groups with the highest player counts so you can get into a game with minimal waiting.

To avoid devaluing existing teleport options you must have the minimum amount of players for the content you wish to play, with everyone on the same world and marked as ready. With these conditions met, the group leader can initiate the teleport which leads to a safe location.

With a heavily interface based project you need a lot of icons! All of these have been created and added to the interfaces.

If you don't want to wait for people to be added to your group via matchmaking you can always send out invites to get some extra members. You can invite people by entering their name, right clicking on the chatbox from most types of chat and from lists such as friends and clans.

And now for a first-look at the appearance of the system. First of all, the main grouping interface. 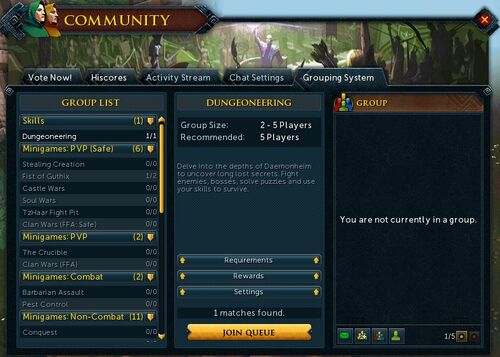 To the left, a list of groupable content, displaying amounts of groups available in each category as well as how many groups/players are in those group types.

To the middle, some basic information about the group, with panels which can be slid up as below. 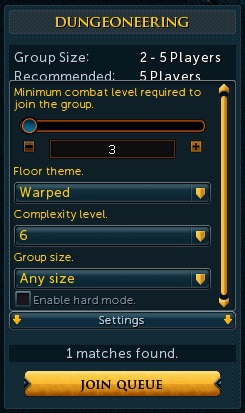 To the right, is the group list interface which can be dragged out and resized, as below. 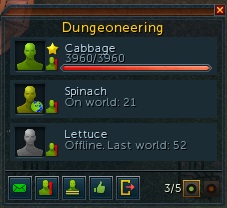 A little while ago, you all voted to make runes more valuable. Since then, work has really gotten under way, and whilst the main goal is still the one you voted for, we've expanded the scope a little to include a handful of quality of life improvements for altar running.

One part of making runes more valuable, is reducing the rate at which they're created by means other than runecrafting. This means removing essence as a reward from challenge bags and reducing or replacing the runes dropped by commonly fought monsters, especially slayer targets and bosses. I can't call out every example, but fire giants, I am so looking at you.

As for altar running, we're buffing the abyssal familiars so that the higher tier ones can carry more essence. Additionally, essence pouches and familiars will start automatically adding their inventories to yours when runecrafting at an altar. This means no more crafting -> unloading your familiar and some pouches -> crafting -> unloading more pouches -> crafting, which should do away with a little bit of ...fiddlyness? Fiddliness? Awkwardness. This also means that you will now only need a single talisman to runecraft combination runes when using pouches and familiars.

Most exciting of all, the runecrafting guild will be getting a new addition. Wizard Goldberg and his wondrous machine will be moving in, and once a day you'll be able to experiment with it, transforming some of your runes into a new reward. We'll talk more about this reward in the future, but I'm certain that a lot of players will want to get their hands on this limited supply item. Although this new D&D is single player, communicating with fellow players might be a good idea, as they might be able to give you a good place to start with your experiments.

The overall goal of this project isn't to rapidly delete runes out of the game, just to close the gap between the number that are created each day and the number that are destroyed somewhat. Goldberg accomplishes this by adding a new method of trickling them out of the game, increasing the rate of rune consumption. The monster rebalance obviously addresses the rate of their creation. I understand no one likes receiving less loot, but the remaining rune drops should start becoming more valuable to compensate.

Buffing altar running may seem counter to the overall goal, but it's in serious need of some love to keep up with the Runespan. Additionally, even with these improvements, we expect the number of runes created a day will still drop and we're happy to see a higher proportion of runes entering the game be created by players. To me, it just seems right that way.

Please let me know your thoughts on the above projects and how this blog could be improved. We may answer some of your questions in this thread, whilst others may be answer in the next blog.