Start a Wiki
This Developer Blog is copied verbatim from the RuneScape website. It is copyrighted by Jagex.
It is written by Mod Kelpie and is dated 8 May 2014.
The Dukes Team Blog

As an experiment I would like to give you an insight into what's currently going on within one of our development teams. By doing so I hope that your feedback would help mould our updates, so they are released to you at a higher quality.

The Team – All hail the Dukes!

Within RuneScape we are split into smaller teams of developers, graphics artists, designers and QA testers (and me). You are probably already aware of one such group, the Ninja Team. Well this developer blog is about the Dukes! Our goal is to continue the fun by providing quality updates.

First off we are winding down on development of a new Quest called 'The Mighty Fall'. The focus now is on testing and bug fixing. I won't say any more about this though, more will be revealed in the June BTS video. So keep an eye out for that.

As we finish off the Quest, we have begun work on some smaller projects. The first of these is Skillchompas! As you may guess from the title, this is a skilling update. The majority of the development work is due to be finished next week.

You will be able to hunt four tiers of new Chinchompas, Mithril, Adamite, Runite and Dragon. You can then equip and use these in Divination, Fishing, Mining and Woodcutting for improved XP rates. Of course, just like those used in combat, each Chinchompa has a single use. They will be tradable, so this does add a new moneymaking method for hunters.

Here is a paint over of each the habitat areas for these new Chinchompas. See if you can work out where each will be. 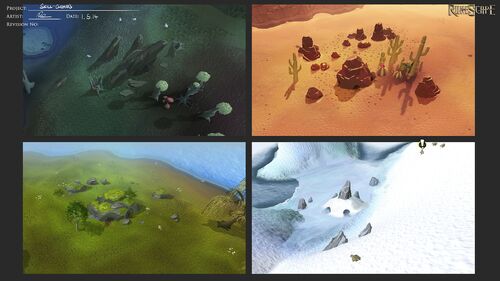 Again, this is another small project we are working on. The main goals are to improve the Pest Control rewards, small tweaks/fixes and to graphically update the island. A few weeks ago, Mod Tim asked for your suggestions and most of what we are currently doing is driven from your feedback.

We are not updating the npcs as part of this project due to the length of time it will take. The reason the island is being updated was that is was reworked a while ago when some environment artists had spare time. We haven't had the chance to do the dev and QA the work involved until now.

Here is a little comparison of the new and old island. 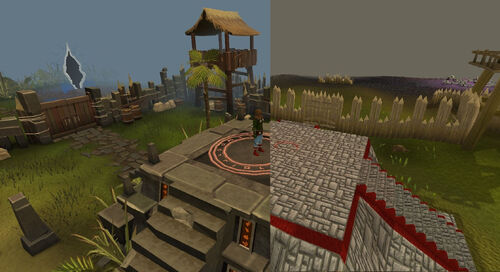 At last year's RuneFest we held a Dragon's Den like competition where the winner pitched an update to revitalise Barbarian Assault by updating the existing game, adding a new hard mode and a Penance King boss. We have since brought in that player to our office to brainstorm ideas further. It isn't all just one person's ideas though, there was also a lot of feedback and suggestions posted on the forums that we have used too.

We are currently at a stage where the design is close to being finalised, so there isn't too much to say at this time. A fair amount of work has already gone into updating the NPCs however. We knew from the beginning we wanted to do a graphical rework and updating the current Penance monsters doesn't rely on a finalised design. Here is the concept for the reworked Penance. 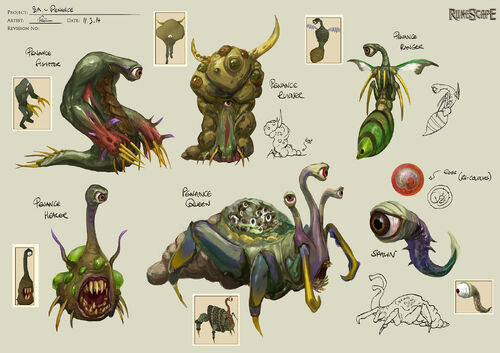 Next week we should be finishing up most of the development work for Skillchompas and Pest Control. At this point most of the team will be focusing on Barbarian Assault. Next time I hope to provide you with more details about the 'weapon of power' that was voted for in a PTTP poll earlier in the year.

Please let me know your thoughts on the above projects and how I could improve this blog. I don't know when the next blog post shall be as I want to wait until we have something interesting to say.

Thank you
Mod Kelpie and The Dukes