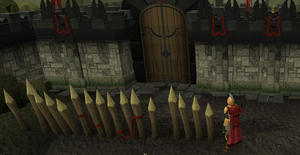 The ever-popular Castle Wars minigame gets a rock-solid new look today, and - thanks to your feedback - loads of tweaks and improvements to the Castle Wars arena and gameplay. Siege warfare's never been so fun, and it's certainly never looked this good!

Our graphics team have outdone themselves: each keep impressively imposing, with thematic trappings in each, and the tunnels beneath the arena are darkly atmospheric and moodily lit. Importantly, we've stayed faithful to the core style you know so well, so whether you're manning the ramparts or sneaking as a sapper, you'll feel right at home.

Your feedback on Castle Wars has led us to implement a number of gameplay improvements, too:

Dual Currency System: Castle Wars tickets have been replaced with two currencies: silver and gold. Silver tickets buy you handy consumables such as ballista parts, potions, and chinchompas. You'll get one of these no matter how you do in the game, so you'll never finish a Castle Wars game empty handed. Those who win or draw, however, will receive gold tickets, which can be spent on the excellent armour sets used within the minigame.

Improved Castle Wars Armour: Speaking of armour, we've greatly improved the Castle Wars armour sets that can be purchased with the gold tickets - profound armour, for example, is now on par with Nex gear. They're also now a 'hybrid' style of armour - great if you like to mix it up with magic, melee and ranged.

Usability Improvements: As well as an update to the interfaces showing the status of your castle, and the game score, there are a range of much-requested usability improvements too:

Finally, the trimmed completionist cape requirement has been changed, so it is now fulfilled by speaking to Lanthus in a full set of profound armour. The cape is meant to encourage you to take part in Castle Wars and be competitive so the requirement will be easier to attain for those playing Castle Wars in the spirit it's intended.

Castle Wars is easier to get into, better-looking and a whole lot more fun than it's ever been. Whether you're a seasoned veteran or a green recruit, it's time: prepare for war!

Take a tour of Castle Wars in our latest Behind the Scenes video: