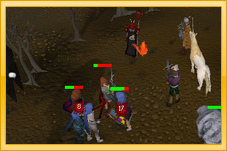 The popular Wilderness minigame, Clan Wars, has received a colossal update this week.

When you next challenge a player to a clan war, you'll notice a range of new options that better suits your battling tastes; for example, you can choose whether players are able to return to the fray after dying, how long the battle may last, how many kills are required for a victory, and even what combat styles are permitted during the fight.

You might wish to force an end to a battle if either team is reduced to five survivors. This avoids chasing down over-energetic die-hards who just won't stand still. Oh, and if you prefer real penalties for failure, you can choose to make players lose all of their items on death.

Beyond that, there's a selection of arenas featuring a variety of different landscapes, so you'll have more choice about where you'd like to fight. Do you prefer obstacles that block Magic/Ranged attacks or obstacles that don't? Do you like empty spaces without any obstacles at all? The original Clan Wars arena will naturally remain available, although some areas of it have become single-way combat zones.

For the more adventurous fighter, Clan Wars offers a pair of vast, free-for-all arenas. Just wander in, alone or with friends, and prepare to fight against anyone you meet. There are no combat restrictions in those arenas, so you'll have free rein to make your own entertainment!

Calladin, the Clan Wars custodian, has something new to offer as well. He'll let you set a friend (or enemy!) as your caller. When you're in a Clan Wars arena, any chat you receive from that player will be copied to your head-up display, so it'll be easier to spot their messages in the chaos of a battle.

So, set your favourite options and prepare to fight, warrior!

Herblorists may be pleased to hear that Bob Barter, the expert on herb prices who stands by the Grand Exchange, is now offering a new service. If you ask him nicely, he'll look through your inventory and try to combine your 3-dose, 2-dose and 1-dose potions into vials containing 4 doses. He even knows how to handle barbarian potions and calquat kegs.

If you use a chisel on a large block of granite, you'll now be able to cut it into smaller blocks for use as Summoning ingredients.

A convenient right-click option has been added to the ghost disciples around the Ectofuntus, to help players collect their tokens even when they don't have the Amulet of Ghostspeak.

One of the skeletal wyverns was appearing as level 158 rather than level 140, even though it was really no tougher than the other level 140 wyverns. It's had its level adjusted to match the rest; this will not affect its difficulty in combat.

Eniola, the banker at the Ourania Altar, will henceforth expect payment from players wishing to use his services to collect purchased items from the Grand Exchange.

Our Graphics team has been busily fixing yet more bugs, including the following: