From 4pm on Friday 27th July to 10am on Monday 30th July (BST), all players with an active RuneScape membership subscription will be able to participate in our second Combat Beta featured event – the Duel Arena! Not only will you have a blast taking on opponents in these vicious one-on-one fights, but you'll also earn your second point towards the unique beta tester reward - The Mad Scientist Outfit: 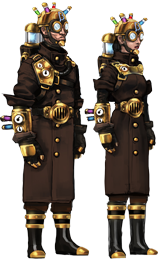 For those of you not in the know, the Mad Scientist Outfit comprises of five pieces in total, but it can only be obtained by attending all four of our Combat Beta featured events. To qualify for this second piece, you’ll need to:

Be a RuneScape member –if you’re not already, subscribe here! Be on a beta world between 4pm Friday 27th July and 10am Monday 30th July (BST). Complete 1 full Duel Arena fight to the death – if either of you forfeits, it won’t count! Once you’ve completed all four weekend events, you’ll be awarded the costume on your live (non-beta) account. You can get more information on this and upcoming events over at our Combat Beta events forum.

The Combat Beta forums are only accessible to members, so you’ll need to log into the forums here and then:

Get the event details from this weekend’s event thread at QFC: 307-308-2-63901940 Give us feedback on the event after you’ve participated at QFC: 307-308-4-63901956 Don’t forget – this is your one and only chance to complete the second weekend event necessary for obtaining the Mad Scientist Outfit! Be sure to get involved by subscribing and then playing duking it out in a match-up in the Duel Arena on the beta world this weekend.