From 4pm on Friday 10th August to 10am on Monday 13th August (BST), all players with an active RuneScape membership subscription will be able to participate in our fourth Combat Beta featured event: the Barrows. You’ll need to take on the ever-unrestful spirits of the Barrows brothers in their tombs in order to loot the prize chest and secure the final point for the unique beta tester reward - The Mad Scientist Outfit: 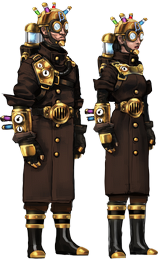 For those of you not in the know, the Mad Scientist Outfit comprises of five pieces in total, but it can only be obtained by attending all four of our Combat Beta featured events. To qualify for this final piece, you’ll need to:

Once you’ve completed all four weekend events, you’ll be awarded the costume on your live (non-beta) account. You can get more information on this and upcoming events over at our Combat Beta events forum.

The Combat Beta forums are only accessible to members, so you’ll need to log into the forums here and then:

Don’t forget – this is your one and only chance to complete the final weekend event necessary for obtaining the Mad Scientist Outfit! Be sure to get involved by subscribing and then battling through the Barrows on the beta worlds this weekend.