The Community Chronicle is back for another instalment. In this edition, we’ll be talking about the upcoming 24 hour gaming marathon for GameBlast (in aid of SpecialEffect) and checking out what's going on in the RuneScape community!

We’re proud to announce that CrusadersScape is now a Silver-ranked fan site. They’ve been working hard to build their community and produce some awesome new features. Rumour has it, they’re currently working on some signature generators for you to track your progress and chart it against your friends!

They’re really keen to get your thoughts on the Power to the Players polls too. Take a look at their forums, and let them know what you’re voting for in their dedicated discussion forum.

You can find out what CrusadersScape have planned for the rest of 2014 in their recent news post.

RuneScape Wiki are constructing their annual Family Photo. Their family photo from last year looked awesome and you can see their community has grown so much and they’re continuing the tradition; be sure to get involved here to immortalise your character before March 1st.

This month has also seen the reintroduction of the Player Gallery. Given the recent combat updates and the poll on Legacy Mode and combat level calculation, the theme is battles! We’ve had some amazing entries already - one of our favourite so far is Teezkut’s Ragefire Boots which he’s made from scratch. Take a look! 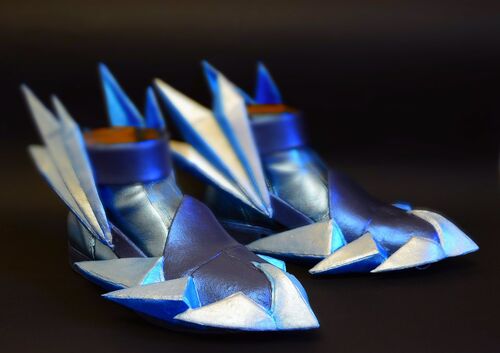 There’s still time to vote on which player-designed emote will make it into the game. There are five amazing finalists to choose from. Currently leading is an emote depicting RuneScape through the Ages. ‘Old Skool’ Dancing is in second place, with Corruption, Gymnastics and Lute Smash bringing up the rear! You can find out more about the competition here, and you can vote in the Quick Poll on the homepage.

We’re incredibly excited about the 24 hour gaming marathon we’ll be doing at the Studio in aid of the GameBlast initiative, which aims to raise money for Special Effect - a fantastic charity which we’ve supported before. To find out more about GameBlast check out the video below, and have a read of the news post.

Be sure to get involved with us by following @RuneScape and tweeting us with the hashtag #RSGameBlast, watching our 24 hour live stream on Twitch, and by getting in-game (to make the most of your Double XP) and joining our friends chat: GameBlast.

It really inspires us to see players coming together to help raise money for charities. If you fancy getting involved in a community initiative, TauOmicronMu, who’ll be at the Studio during the event, will be running his second Massive Charity Fundraiser which will be running for the whole weekend.

RuneZone’s RuneRadio aired a Combat Podcast last night; it answers all of your questions about the recent combat updates, the Beta and Legacy Mode.

Be sure to subscribe to our Podbean page to keep up with the latest RuneScape podcasts!

That’s all for this edition! As ever, we’re on the look-out for awesome stuff from around the community – if you have any suggestions on what you’d like to include let us know by e-mailing community@jagex.com!

The RuneScape Community Team
Retrieved from "https://runescape.fandom.com/wiki/Update:Community_Chronicle_-_20/02?oldid=10182928"
Community content is available under CC-BY-SA unless otherwise noted.