There’s a chill in the air as Halloween approaches, so warm away those goosebumps with this week’s Community Round-Up!

To coincide with this week’s release, we’ve asked some of the best-known clans in Gielinor to be on hand at the Goblin Village and encourage some new adventurers to get involved in clan activities!

The event will be ongoing throughout the weekend; you can find all the crucial details – times and locations – at the event’s official forum thread here.

Mod Sushi Pi from Community Management is holding a Reddit AMA – or “Ask Me Anything” – on October 25th from 8pm (BST).

Are you hosting a hair-raising Halloween event and want to invite some creepy companions along? Maybe you’re looking for a suitably spine-chilling event to attend yourself. Either way, creep on over to this thread to sate your hunger for all things horrible! Plenty of ‘Scapers have already posted, so there’s something for everyone – unless you’re too scared...

The lovely folks at RuneZone have bagged themselves an interview with Britain’s Got Talent winner and noted RuneScape fan, George Sampson. Tune into RuneRadio between 7pm and 8pm (BST) on October 20th to hear the interview.

The mighty Tip.it have bolstered their arsenal of great guides with this one for the Festival of the Dead. If you need some help while the festival's still in full swing, be sure to check it out right away!

Top fansite Zybez are celebrating Halloween by taking down all of the old-school bosses – from the King Black Dragon to the Giant Mole. Afterwards, there’s going to be a massive party! It’s too good to turn down so for all the wheres and whens of the event, click here.

Getting to Know the Community Team: Mod Drebin

It’s always a good idea for the Community Team to get as involved with the community as possible, so we’ve decided to introduce ourselves right here and say hello! This week, Mod Drebin kicks things off.

Picture this. My first week at Jagex saw the Construction skill released; the God Wars Dungeon was merely a whisper on the wind; and High Detail mode was but a rumour. I know, I know. Cool story, granddad! But as an avid player of some 8 years too, I’ve not just seen these updates as a member of staff – I’ve experienced them as a player too. I can honestly say I’ve never loved the game more!

Outside of work, I’m a professional assassin and stand-up comedian. Just kidding – I don’t leave work. ;)

It’s not easy to get your hands on Pernix armour, as taking down the mighty Nex is the only way to obtain it! If you’ve never seen it before, ShipyNine has created this awesome fanart to show off the full Pernix set in all its glory. 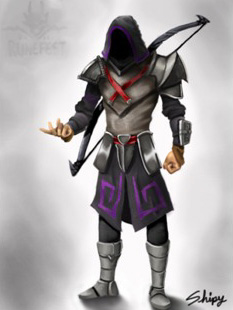 That’s all for this week. As Halloween creeps closer, be sure to bolt your windows, fill a bottle with holy water and check back in next Thursday!

Discuss this here.
Retrieved from "https://runescape.fandom.com/wiki/Update:Community_Round-Up:_18/10/2012?oldid=9147188"
Community content is available under CC-BY-SA unless otherwise noted.