Start a Wiki
This Developer Blog is copied verbatim from the RuneScape website. It is copyrighted by Jagex.
It is written by Mod Timbo and is dated 19 July 2017.
Dev Blog: Seasonal High Scores

Hello and welcome to another Developer Blog! This time we're going to be talking about the return of Seasonal High Scores. What is that I hear - "Seasonal High Scores didn't work before!" - yes and we totally agree and that is why we wanted to release a dev blog explaining how we're bringing them back, changes we're going to make and what we could do with them going forward with your support.

It's fair to say that previous Seasonal High Scores weren't perfect, there was a time pressure put on players to stay on top that was bordering unreasonable, if you missed a millisecond then you could no longer take part and they all weren't particularly exciting. This dev blog will go through these reasons and show you our solutions to making Seasonal High Scores the high scores that we all want.

Problems of the old system

We love Seasonal High Scores as an idea, the ability to create a new high score around an interesting activity or skill and get people to have a go at being the best over a short period of time. There is little competition in existing main skill high scores but it should be important that anyone with the right ideas, skills and mindset can take part and have a shot at the top.

That is not what happened with the old system. Instead, amount of effort was valued higher than the quality of that effort which led to you guys feeling like if you never got in the first minute of the high score then you wouldn't have a chance to win. Not only that but if you started to take part in one of those high scores, you had to dedicate huge amounts of time to making sure that you were still in with a shot at coming top. These are behaviours which are not good for you and definitely don't motivate you to want to try another.

This is not good enough for what you all want and what we want out of seasonal high scores, which is what this blog is all about. Next, we'll talk about the changes we want to make to fix all of these issues.

Making it time based and inclusive

Absolutely number one priority for us is to make sure that the best player, or team, that takes part in the new seasonal high scores finishes number one regardless of when they started. This should also include the amount of effort the player wants to put in to get their best attempt and not being forced to continually grind out the activity to maintain a rank.

One of the ways we're going to start with is by running some timed high scores for a number of bosses and also Dungeoneering. They are pieces of content that already time themselves and obtaining a best time in either situation relies on skill rather than anything else (except maybe a little setup). We see these timed activities as one of the best ways of running seasonal high scores for the foreseeable future but would love to hear of what you all would like to see going forward.

High scores you want to take part in

Seasonal high scores are for you. We want to provide the platform for you all to compete against each other based on skill and then reward high skill players for their achievement. This is why its important that you let us know what you think about our first set of high scores (listed a little further), what sort of seasonal high scores would you like to see us implement in the future that you would love to compete in and, perhaps most importantly, how we should reward taking part in these high scores.

When it came to running new seasonal high scores, we've had a lot of discussions internally about whether or not to bring back the old rewards and reward system. However, we think that it should be up to you as it is your high scores so we have a poll running shortly (starting on Wednesday 26th July) which will ask you how we should go about it. 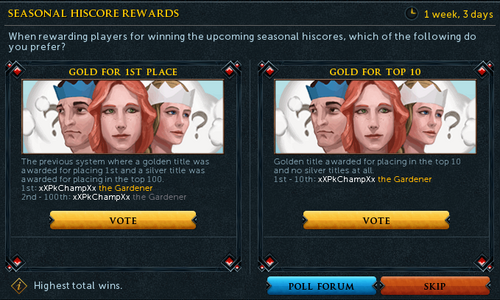 The seasonal high scores that we're going to running over the coming weeks are as folllows:

We feel that it's important that we have two different types of high score so that its not just limited to those who want to take part in PvM. Dungeoneering has a passionate community surrounding it and with it already being timed, it fits perfectly in to our new way of thinking and provides a skilling alternative whilst we ask you what you think.

On top of this, we're adding some Ninja fixes (we wouldn't be Ninja if we didn't have some of these) to make it easier to know that seasonal high scores are going on in-game. Below are some screenshots showing a work in progress implementation of seasonal high score notifications on the Dungeoneering floor settings interface and when creating a boss instance with a boss that has an active seasonal high score. 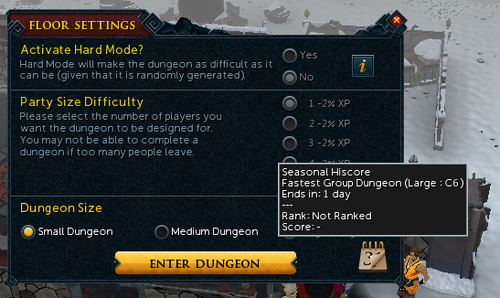 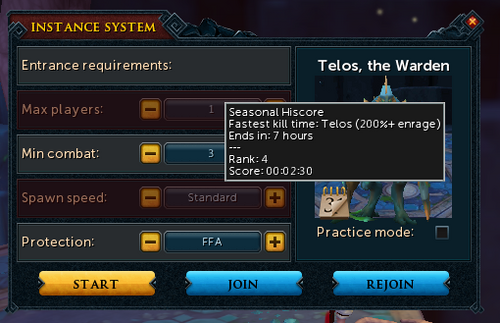 Of course, this is just the beginning and we definitely want to do more.

It's a cliché but the sky is the limit when it comes to what you want for seasonal high scores moving forward. As long as it meets our criteria of making sure that the best participant(s) win and that they could win with a single entry then we're open to hearing what you have to say.

We're already in the Ninja team forum and this is one of the many places where we will look for new ideas. You could even perhaps give us ideas responding to this dev blog as we'll be keeping an eye out for how this goes. Twitter and reddit are other places you can find Ninjas and where we'll be looking out for ideas as usual.

As we've said time and time again throughout the blog, the seasonal high scores belong to the players. Help us shape them in to what you want and then compete in something that is fun to do.

Retrieved from "https://runescape.fandom.com/wiki/Update:Dev_Blog:_Seasonal_High_Scores?oldid=19994587"
Community content is available under CC-BY-SA unless otherwise noted.