The strange occurrences were portentous after all – the legendary Falador Massacre has returned (well, sort of)!

Get yourself over to Falador in the newly reopened World 111 and engage in an event the like of which hasn’t been seen for 10 years!

The PKing might be safe this time but what about the boss fight with a giant version of Durial321?

How to take part 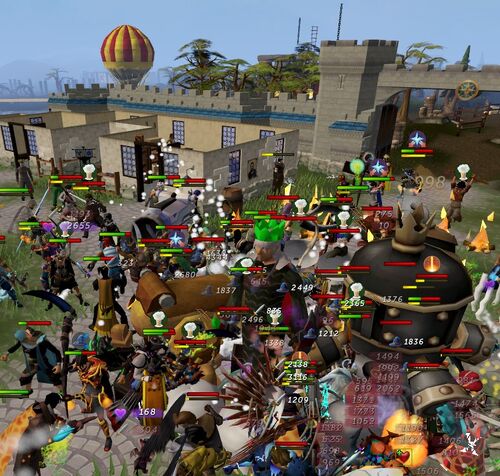 The event has two stages that rotate on a constant cycle:

Players in the vicinity of the massacre area will randomly transmogrify into a ghostly Durial321, complete with the power to attack any nearby player and use his equipment load out. Victims cannot fight back but will not actually die or lose any items if killed by a possessed player. Players possessed by Durial will receive double PvP XP from these “kills” too.

After several instances of possession, a giant Durial321 boss will appear. Join your fellow players in trying to take down this boss or help Durial destroy your fellow players! Being killed by Durial or other players during this phase of the event will also not cause you to lose items. You will receive double PvP XP from “kills” during this phase too.

Depending on player demand, the event may be triggered in other game worlds to allow as many of you as possible the chance to experience it. Keep an eye on our social media channels and world broadcasts in case other worlds are opened up to Durial321’s wrath! Keep an eye out for other community activities this week surrounding the Falador Massacre 10-year anniversary.

A brand new memorial will also be added to Falador Park next week, be sure to pay it a visit!

The Falador Massacre is something that lives on in the memory of anyone who has ever been connected to RuneScape in quite an affectionate manner. However, it also stands a serious example of how unfair bug exploitation and cheating can be.

Cheating and glitch exploitation will not be tolerated in RuneScape even if the passage of time changes how we look at past events. For more information, see the RuneScape Support Centre.

Enjoy this chance to mark the 10th anniversary of one on RuneScape’s most iconic and notorious events.

There are lots of helpful fixes for you this week, covering all sorts of things from quests and scrimshaws to even the most recent additions to Invention.

The Ninjas have been at it again too, improving the quality of life across Gielinor. Included in their work this week are the ability to keepsake Socky McGee for those of you who unlocked the little fella in Meg's Cases. Clue scrolls, effigies and high-end defender components are now distributed via lootshare too!

Full patch notes for this update can be found on the forums.

Saturday's Summer Summit live stream event was a great chance for us to share the future plans of RuneScape, Chronicle and RuneScape Idle Adventures with you, all while having a rip-roaring time.

If you somehow missed the show, then fear not. Our keynote speeches have been handily segmented into YouTube videos for you to watch at your leisure! Check out the Summer Summit playlist on the RuneScape channel.

There's a sting in the tail of this one – literally! Get your hands on the prickly and dangerous scorpion outfit and take on the guise of an intimidating arachnid. 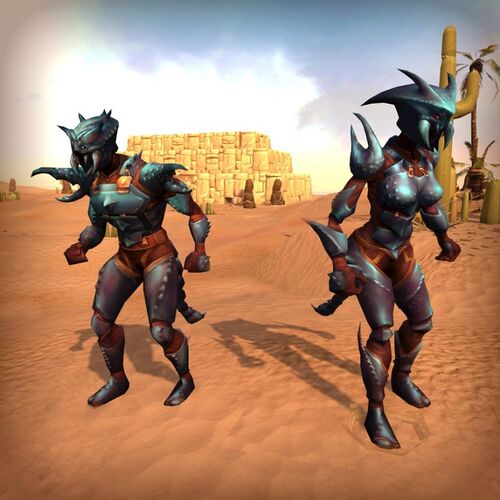 Each week we stream developer Q&As, in-game events and more. Watch the streams and find a full schedule on the Twitch channel. Check the YouTube channel for videos you may have missed, including ones from the Summer Summit.

June is looking like an epic month in RuneScape. Gower Quest, the new solo boss Telos, and so much more. Join us for a discussion on as much of the content featured in the Month Ahead BTS as possible.

Join Mod Shauny at twitch.tv/runescape for a Community Stream.

Fancy a sneak-peek of some of next week's patch notes? Tune into Mod Shauny's Friday stream! He'll also be checking out Pest Control to show off its swanky new graphical update.

Mod Lee will be hosting some Community PvM goodness live on Twitch.

Our Head Ninja will be taking over the decks as our featured Snapchatter of the week! Check out a day in his life. Follow us at 'runescapegame' on Snapchat, and share your favourite screenshots using #JModSnapchatTakeover on Twitter and Instagram.

Don't forget – you can win a gaming laptop or life-sized dragon claws this summer with RuneScape! Find out more in the special new post.

Just a quick reminder that Meg's Cases will disappear from the game next Sunday 12th June at 23:59 UTC. You still have time to catch up on the cases that you still have open. Go for it and unlock any remaining rewards including some fantastic cosmetics!

The RuneScape Team
Retrieved from "https://runescape.fandom.com/wiki/Update:Falador_Massacre_-_10_Year_Anniversary_Event_-_World_111?oldid=17064439"
Community content is available under CC-BY-SA unless otherwise noted.