One Saradominist priest has had a revolutionary idea: stop mourning the dead, and instead celebrate the lives they lived! That means hosting the 'Festival of the Dead', a gathering of friends where offerings are made, fireworks are set off, and stories are told in memory of those who have fallen. 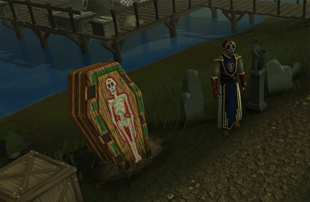 Father Joakim has researched the Festival of the Dead, back to its (jade) roots in Karamja. The most important centrepiece of the Festival, it seems, is an item that once belonged to the dead, which is where you come in! Scour Gielinor for an item that once belonged to the recently deceased, and offer it as a gift to your chosen spirit. Once that's done, paint clay skulls, offer special flowers, set off fireworks, tell stories and generally party until everyone is in high spirits!

There are five recognisable characters for you to commune with, as long as you have completed the associated quests. By successfully celebrating each of your fallen comrades, you'll unlock a skeleton mask and double XP multipliers for your Prayer training, up to a maximum of 251,000 additional XP!

The XP boost is only valid for the following activities:

Where to start the Festival of the Dead: Father Joakim is standing by a large coffin, behind the church south-east of Burthorpe, and south of Lumbridge cemetery.

The five celebrations each have a different Prayer and quest requirement, as noted below:

If you haven't already, be sure to check out Festival of the Dead in our recent Behind the Scenes video:

Discuss this here.
Retrieved from "https://runescape.fandom.com/wiki/Update:Festival_of_the_Dead?oldid=9777731"
Community content is available under CC-BY-SA unless otherwise noted.