The free-to-play version of RuneScape gets some serious love in this week's update, with two new bosses and a tasty combat upgrade being the tip of the iceberg. Treasure Hunter will also be rocked by a boosted Prismania event, which offers up to 60% extra XP. Finally, some frankly fantastic mammoth outfits have arrived in Solomon's Store – check them out!

The free-to-play version of RuneScape has been given a powerful boost with new bosses, combat improvements and dungeoneering options.

Free players can now take on the mighty King Black Dragon by getting to his lair via the Wilderness. Only the bravest and best-equipped need apply. The drops, dragon bones and black dragonhides, are now sellable by free players, but can only be buried and processed by members. Note that the Edgeville artefact cannot be used in free-to-play worlds to access to this boss.

Similarly, the Giant Mole and hard-mode Giant Mole bosses in the Falador Mole Lair are also now available to battle in free-to-play worlds. As the Agility requirement for the short cuts in these boss fights was higher than free-to-play characters could reach, we have taken the decision to remove the short cuts from both members' and free-to-play worlds. This should create a more streamlined and enjoyable bossing experience. Mole skin drops are now sellable for free players too, but only members can hand them in to Wyson.

HINT: Free-to-play characters taking on this boss may wish to craft a special shield by finding the clingy mole drop. Attaching the mole to the anti-dragon shield can create a powerful ally for taking on these bosses.

Combat options for free players have also received a super overhaul today. Perhaps the coolest part of this update is that dual-wielding is now possible. Not only does this look great, but the ability to use off-hand weapons can really revitalise your combat builds and set ups. In addition, a host of new combat abilities has also arrived:

Some new weapons have also been added to the dungeoneering reward shop for free players. They are made of gravite, a powerful substance indeed, and can be purchased with reward tokens earned by Dungeoneering:

To help you, more Dungeoneering gear (up to Level 50) has also been made available to free players. This can only be worn in Daemonheim but is sturdy and will doubtlessly help with training the skill, earning tokens and unlocking the gravite weapons.

And that's not all! The free-to-play game has also seen a host of bug fixes and improvements. Enjoy the new experiences and 'Scape until your heart's content!

Check out the full patch notes for today's update.

From 3rd March until 7th March, Prismania will be making a welcome return to Treasure Hunter. Ready those Keys because this time it's Prismania plus, meaning that all stars and lamps are not only prismatic but will offer an extra 10% XP-boost to a different skill group each day. 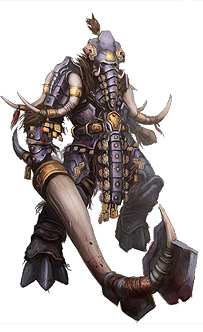 Fancy looking like a tusked, hulking brute with a giant trunk and even bigger axe? Well now you can thanks to the new mammoth outfits that have just come into stock in Solomon's Store!

Inspired by last year's Acheron mammoths, this is your chance to stomp around Gielinor like a prehistoric rock star.