It's official. The Edicts of Guthix are no more, and the gods are on their way back to Gielinor! God Emissaries are spreading the word throughout the RuneScape world, and are seeking faithful followers for their gods. They've got some great rewards for those who pledge their support - the only thing to decide is which cause to join! 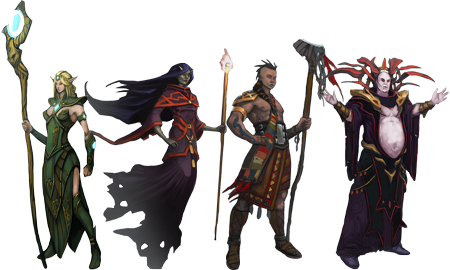 There are eight factions in all, each with an NPC to give you a run-down of their god’s philosophies and goals. They can be found at various locations in the free area:

Once you've decided which cause is the worthiest, just speak to your chosen emissary to pledge your support. Right away, they'll give you a title, a wieldable banner with which to display your allegiance and the Book of the Gods. This contains the first chapters of eight tales, detailing what's been happening with the Gods since the Third Age ended. If you change your mind at any point, you can simply speak to another emissary to switch.

If you're a member, you'll then be able to perform three sets of jobs for the emissary. Each set has its own category - combat, skilling or exploration - and the skill requirements (and rewards) increase as you progress through them. While you progress through each set of jobs linearly, you can take on jobs from different sets at the same time.

The jobs for each emissary are the same, and if you switch to a different emissary, you'll pick up the jobs at the same point you left them. This means that you won't have to restart if you change your mind, and you won't earn additional rewards by completing one emissary's jobs and then switching to another.

Completion of the jobs earns you experience in relevant skills, and buffs - activated from your wieldable banner - which are helpful in related activities. You'll also unlock the remaining chapters in your Book of the Gods.

If you complete all of the jobs in all three categories, you will receive a relic helm - level 60 hybrid armour, styled after your choice of faction!

Eight factions are vying for your support, with eight different philosophies to proudly proclaim as your own. The choice is yours!

Mod Osborne lays down the lore in our latest Behind the Scenes video: