In this new Construction distraction and diversion, you'll help Copernicus Glyph - master sculptor - to build up to four statues each month at sites around Gielinor. 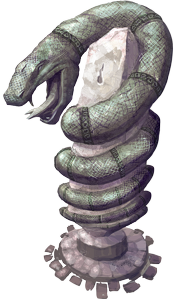 There are four statue sites around the world: in Lumbridge, Taverley, Canifis and Gu'Tanoth. At each site, you'll have the choice of building a statue of any of the following: Commander Zilyana, Juna, Kr'il Tsutsaroth and General Graardor. It's up to you which statue you build and where, but tempers in the area may flare if you make a controversial choice!

When you've made your choice, you'll follow Copernicus's expert directions to build scaffolding, from which his latest masterwork can be wrought. Once you've determined the correct number of pieces to be used and arranged them in columns of the right heights, the statue will be completed and you'll earn a hearty chunk of Construction XP. The quality of the statue that you build - and the XP reward - will depend on your current Construction level.

If you have chosen a statue that's appropriate to the area in which you're building, then you'll have the opportunity to pray at that statue for a Prayer XP reward. However, if you've built a statue that ill fits the area's faith, then you'll earn the ire of one of the local god's more militant followers. Drive off the fanatic who attacks you and you'll earn a Slayer XP reward. In this way, you can choose to receive either Slayer or Prayer XP for each of the four statues that you can build per month.

At the start of each calendar month, any statues you've built will be destroyed, and you'll be able to complete the D&D four more times for further rewards. Build any one statue four months in a row (in any location) and you'll earn a wieldable chisel, in the colour of the statue's related god. When wielded, this handy tool can be used to boost your Construction level by 1 - great for making some headway in your player-owned house!

So, what're you waiting for? Prove to Copernicus that you're a chip off the old block and earn yourself some rocking rewards!

How to start God Statues:

Speak to Copernicus Glyph. He can be found at any of the four statue sites.

You must have done at least one of the following:

Take a tour of the God Statues D&D in this recent Behind the Scenes video: