It's been ten years since the King Black Dragon ate his first adventurer, and although Gielinor is a bigger, more dangerous place than ever, he's still ranked among RuneScape's most lethal monsters. With this in mind, we're proud to herald the return of the king, with an awe-inspiring new look and graphically reworked lair! 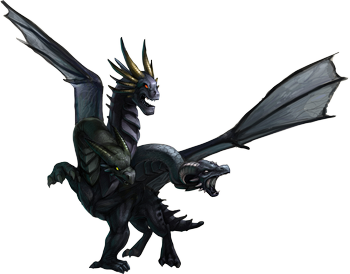 To tempt a new generation of dragon slayers to face down this three-headed terror, there's a magical artefact behind Edgeville Monastery which allows quick access to his home. For those entering the old-fashioned way via the Wilderness, there's a 10% bonus to damage dealt to the King Black Dragon.

The dragon's hoard of loot has also been enriched. We've increased the value of his drops across the board, but there are also brand-new Dragon Rider gloves and boots - with best-in-slot prayer bonuses - and two cosmetic upgrade kits for the dragon kiteshield: one adding ornate decoration, and the other giving a more warlike appearance.

Finally, everyone involved in taking down the King Black Dragon has a chance to receive a lore book, chronicling the rise and fall of the fabled Dragon Riders. As with the recent God Wars lore books, this will be given in addition to regular drops, so you won't miss out if lore's not your thing.

Step into the dragon's lair - if you dare!

How to fight the King Black Dragon[help]:

Along with the King Black Dragon's Lair, four more dungeons have been updated. Battle your way through the following dens of villainy and drink in their breathtaking new graphics and sound:

If you haven't already, you can take a tour of the King Black Dragon's lair and the dungeon updates in our recent Behind the Scenes video: