Enter into a deadly new quest that features the legendary Barrows Brothers and forms part of the Sliske's Endgame storyline. Play Kindred Spirits now and enjoy puzzling your way through a series of increasingly deadly games!

Also, be sure to visit the reworked Void Knights' Outpost in the glory of NXT, complete with a suitably moody atmosphere.

You can probably tell by the recent spate of mysterious disappearances that dark and twisted schemes are afoot in Gielinor (when are they not?). Find out what's going on as you puzzle your way through a twisted tale with an edge of dark humour.

Discover more about the history and lore of the Barrows Brothers as events take an even more sinister turn. Are things ramping up for Sliske's Endgame? Who is behind the disappearances and where is this all leading? Seeking the truth will strain your moral fibre - are you ready to play a little game?

Talk to Linza at the smithy in Burthorpe

You will need Level 60 in Herblore, Agility, Crafting and Smithing. You will also need to have completed the quest Missing Presumed Death.

Extra Requirement - during Mega May you must also complete Meg's Case "Robber From the Darkness Part 7". Please note that after Mega May has ended, Kindred Spirits will still be accessible without this extra requirement.

First up you'll receive large chunks of XP in Crafting, Smithing, Herblore and Agility. You will also get access to a brand new Barrows wight for the Barrows mini-game. Defeat this undead horror and you will have the chance to loot their brand new tier 80 armour set from the Barrows chest.

As well as this, the quest is full of lore-heavy rewards await you as this quest cuts right to the heart of the Barrows Brothers themselves. Discover more than ever about who these undead warriors were in life, as well as their personal struggles. You'll also uncover more of Sliske's schemes as the build up to the endgame itself really kicks into gear. 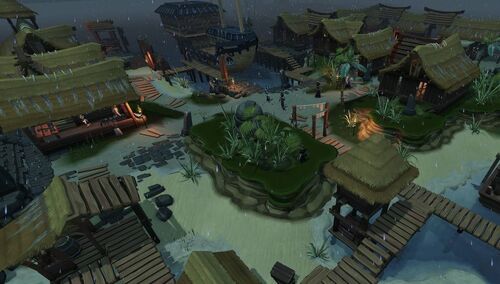 Be sure to visit the Void Knight Outpost in the glory of the NXT client. The atmosphere and architecture have both had a fantastic overhaul and the mood is now suitably dark and stormy. After all, every day's a rainy day for a Void Knight, beating back the slathering hordes…

Each week we stream developer Q&As, in-game events and more. You can watch and find a streaming schedule on our Twitch channel. Check the YouTube channel, for videos you may have missed. This week we're taking a break from Developer Q&As, but never fear! We have something a little special for you this weekend with the RuneScape Summer Summit.

Want to find out all the grisly details from the development of the newest quest? Join Mod Shauny as he hosts a playthrough with Mod Raven, live this Tuesday! There WILL be spoilers!

Our amazing new strategy card game, Chronicle: RuneScape Legends, hits Steam this Thursday. Join us for an action-packed stream that pits two teams of Chronicle-loving JMods against each other. Who will win? Team Deadly or Team Merchant? Tune in to find out on the Chronicle Twitch channel!

Tune in to find out all that we have planned for you this Summer, as well as the ideas that will be going into 2017's content poll. Watch for feature reveals, teasers, and much, much more!

RS, Old School RuneScape, Chronicle, and our new mobile game RuneScape: Idle Adventures will all be covered - so this is every 'Scaper's essential guide to the rest of 2016 and beyond.

More details will come soon, so stay tuned to the RuneScape website!

Mod Lee will be hosting some Community PvM goodness live on Twitch.

The man. The legend. Tune into our Snapchat this Thursday to check out a day in the life of Mod Osborne. Find out if his oversized face will fit into a selfie, and much more. Follow us at 'runescapegame' on Snapchat, and share your favourite screenshots using #JModSnapchatTakeover on Twitter and Instagram!

You're in for a ride, so enjoy it!