This week we wrap up the majestic Myreque quest series with the climactic River of Blood. You’ve followed the story through every insidious twist and now invasion seems the only outcome. A proper send-off to this epic tale of vampyres and freedom fighters is definitely in order, so sink your fangs in and enjoy! 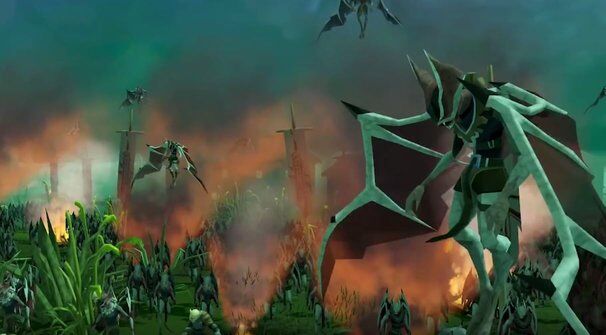 Also this week, tool up in style, as Solomon’s Store fills its shelves with new elegant weapons!

Speak to King Roald and Aeonisig in Varrock Palace. 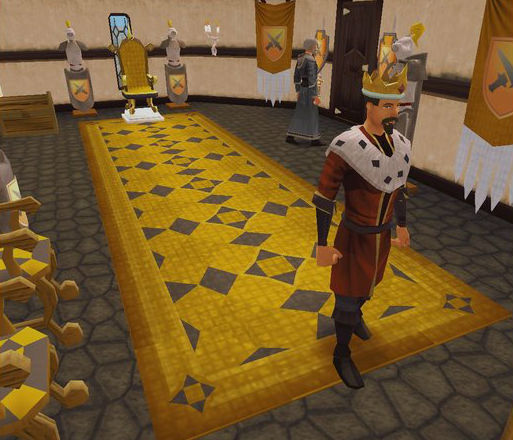 QUESTS: Defender of Varrock, All Fired Up and The Lord of Vampyrium

The epic Myreque quest series comes to a head in River of Blood. Vanescula has shown her true colours and is poised to invade Misthalin, crossing the River Salve with a newly immune army of vyres. Rush to King Roald and resolve a dangerous conflict that threatens all of Gielinor. Are you up to the task?

Completing the quest will also give you access to the new defensive pocket slot items blood essences. They are similar to auras but have their own cooldown and charge with the congealed blood drop that can be earned by killing Morytania creatures (especially ravenous ghouls). They have a constant passive effect and a more potent, short-term, activated effect for those times when you really need a defensive boost. Further explore the art of blood essences by burning vyre corpses in the Columbarium after you have completed River of Blood, but well let you discover all about that for yourselves!

Your next reward will continue the Myreque series tradition of discovering newer and better weapons. It is a new and augmentable (post-quest) two-handed blisterwood weapon for each combat style, but with a small twist...

Finally, as with a few of the previous Myreque quests, you will also get a multi-use XP tome, granting experience in skills of your choice. If you manage to earn and use it during this month of April, it will have an extra use as an early bird bonus!

You can also check out the full patch notes for today's update in the forum thread.

Memorial to the Myreque | 5 days left!

Remember, if youve finished or are close to finishing Lord of Vampyrium and want an extra boost before taking on River of Blood, take part in the early bird XP offer on Memorial to the Myreque. This daily activity can net you an extra 100,000 XP but is only around until 23:59 on 30th April! For all details, see the news post.

Show your foes that you’ll mess with them in style with new elegant and ornate weapon overrides in Solomon’s General Store. All combat disciplines are catered for with each getting a choice of gorgeous looks, here are just a few, head to the store to see the full range:

Each week we stream developer Q&As, in-game events and more. Watch our streams and find a full streaming schedule on our Twitch channel. Check our YouTube channel, for videos you may have missed.

We’ve got loads planned for you this week like a first look at May’s Meg-themed content and a play through of the epic vampyre finale!

Be as broad or specific as you like with your questions this week as we give you a look at “Mega May”. Meg has set up her own detective agency - can you help her solve next month’s mysteries?

The epic Vampyre finale is here and Mod Shauny will be playing through the quest (potentially with a special guest!) for your viewing pleasure. THERE WILL BE SPOILERS – you have been warned!!

Mod Lee will be hosting his Community PvM goodness live on Twitch.

In Other News
WIN: a Crystal Halberd and 3 months membership

You can still enter to win in our amazing NXT screenshot competition! Go to the news post to find out more.

On Thursday, well be letting Mod Ollie, Senior Content Developer of The Watch, loose on the RuneScape Snapchat . Follow the account 'runescapegame' to find out a little bit more about life at Jagex from his perspective. Weve also been promised lots of trolling and surely you wouldnt want to miss that?

Now get out there and have fun preventing one of the Fifth Ages mightiest rumbles!