Our biggest equipment update yet is here! As previewed at RuneFest 2011 , and building on the improvements already seen in the Barrows update and the Troll Warzone, we’re proud to present our latest batch of graphical improvements to armour and shields. Taking into account your feedback from Runefest and the forums, everything from adamant to Zuriel’s has been spruced up to look distinct (take a look at an addy platebody next to a rune platebody), full of character and just plain amazing. Read on for full details of the gear we’ve revamped:

We’ve made each set look more imposing as the level requirements rise, and we’ve gone out of our way to make many of the rarer variants stand out. What are you waiting for? Go and check out your bank!

Gnome on the Range 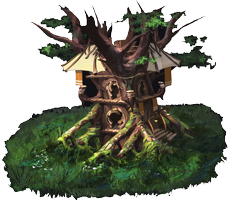 Gnome-related content is also given a fresh coat of creosote today, with a complete rework of gnome NPC models, chatheads and environments. Curved, stylised wooden architecture now pervades the Gnome Stronghold; lush, verdant topiary marks the borders of the Tree Gnome Village; and the top level of the Grand Tree really is a sight to behold, with some amazing lighting effects and a tremendous view. Each gnomish chathead and NPC model has been given a new level of detail too, so make sure to book in some face-time with these diminutive denizens of the forest.

Of course, this is all part of our ongoing efforts to overhaul the game’s look – be sure to continue giving us your feedback on RuneScape’s visuals on the forums.

Finally, we’ve made some changes to reward you stalwart clan skillers for your ongoing hard graft. Upon becoming eligible for a clan ring, you’ll also attain a Clan Fealty rank of 1, which means a 15% bonus to skilling XP earned at skill plots in your citadel from the next build tick. For each subsequent week that you earn your clan ring, you’ll gain another rank (up to 3), for a potential bonus of +45% XP! Along with extra skill lamps and a trimmed upgrade to your clan cape that improves with your rank, there’s never been a better time to get to work in your citadel.

On top of this, mining and woodcutting plots no longer degrade after a single use, and Shattered Heart rocks can now be obtained while skilling in your citadel.

The quota you’ll need to meet each week has been slightly increased across the board to reflect the additional reward, and your Fealty rank will decrease by 1 for each week that you do not meet your quota, but you can always attain it anew.

Clan admins among you also have some new tools to manage the maintenance of your citadels. It is now possible to lock out skill plots once an XP target has been met, allowing you to direct the efforts of your clan, as needed, to meet your weekly upkeep needs. It’s also possible to lock a skill plot indefinitely, until it is manually unlocked.