Tonight there's gonna be a jailbreak in Some Like It Cold: the latest in the series of quests starring RuneScape's megalomaniacal penguins. Expect espionage, improbable disguises, circus-loving seal guards, and good old rock n' roll. 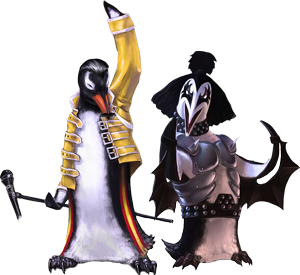 While following a lead regarding the whereabouts of a lost comrade, Teddy the polar bear spy has been captured by long-standing enemies, the seals. Diplomatic relations between the two factions are already frosty, and tempers are starting to heat up in this cold war.

Your mission - should you choose to accept it - is to infiltrate the POW (Prisoner of Walrus) camp in which Teddy is incarcerated. With the help of rock gods Ping and Pong, you'll locate Teddy, incite a riot, beat the guards at Battlefish, and enact a prison break like no other.

Rewards include a boatload of Fishing, Crafting, Construction and Thieving XP, but that's just the tip of the iceberg. There's also a new thieving-based event in Balthazar Beauregard's Big Top Bonanza; the opportunity to customise your clockwork penguin suit; and a surprise for sharp-eyed spies among you.

Finally, there's an Early (Flightless) Bird Bonus for everyone enjoying Some Like It Cold fresh from the freezer. Complete the quest by the 21st of August 2012 (GMT) to earn an Early Bird XP tome, which imparts the following:

Speak to Chuck in Ardougne Zoo. Note that Chuck will only appear if you meet the quest requirement given below.

You must be a member.

We've put together a raft of improvements for the Queen Black Dragon based on your feedback, in particular the well-reasoned threads of Tamond and Korey the l.