Bandos and Armadyl are locked in a deific stand-off above Falador. From atop lofty towers, they're gathering divine energy to fuel siege weapons of prodigious power - enough to kill a god.

After pledging your allegiance to Armadyl or Bandos, you'll support the energy-gathering effort to help your god get his shot off first, killing the other outright.

Protect friendly caravans sent out to gather the energy and attack those belonging to the enemy; battle enemy players; build powerful war structures along the caravan routes and have your say in your side's grand strategy - all to make sure your god's the one standing at the end!

The stakes have never been higher, and the rewards are awesome: new combat abilities; hybrid armour with a chance to reduce cooldowns on combat abilities; titles, cosmetic weapon overrides and - of course - plenty of XP.

Read on for further details, or get started now!

Whether you're a battle-hardened fighter or a peaceful skiller, there's plenty that you can do to help determine the outcome of The Bird and the Beast. Everything described in this section will help your faction harvest divine energy and/or hinder the enemy in doing so, thus affecting the factions' overall score. At the end of the six week event, the side that has the highest overall score (as shown on the bar at the top of the screen in event areas) will emerge victorious - and for the losing god, it'll be lights out!

Contributing in also earns you renown that can be spent on rewards[help] at your faction's quartermaster.

Note that this a safe event. If you die in one of the marked zones around RuneScape's major cities - be it to an NPC or another player - you'll respawn with all your gear intact at your faction camp.

Once you've spoken to Kara-Meir north of Falador and chosen your side, you're good to get started. Read on, and see the wiki[help] for full details of everything you can do to help.

Divination energy is gathered by caravans[help] sent out by both sides. The position of active caravans can be seen on the war map in your faction camp, or the world map interface.

Attack your enemy's caravans and accompany your own to ensure your side comes out on top. If enabled via the Bird and the Beast interface, you can even fight other players[help] for renown, heroic skulls[help] and bragging rights. Note that having PvP enabled also increases your overall renown gain.

If you're not a fighting type, you can follow friendly caravans and help siphon divine energy when they stop, or you can halt enemy NPC diviners by clicking on them. You can also interrupt players who are siphoning energy by using a disruptor rod[help] on them.

RuneScape members can claim construction nodes along the caravan routes, and can choose from a selection of useful buildings[help] to place there, whose handy effects include summoning friendly NPCs and increasing energy gathering speed. Once chosen, the initiating player will start to build, and others (both free players and members) can help.

Each claimed node acts as a teleportation destination for its faction, accessible via the war map.

If the opposing faction has claimed a node, you can work to sabotage it. If it's destroyed, its benefits will be removed its benefits [sic] and the node will be freed up.

You'll have a say in a certain aspects of your faction's battle strategy.

One example is the construction of golems[help]. Speak to the golem master on the first floor of your faction's tower to cast your vote on what body parts to use in its construction. The completed golems will defend or attack caravans (depending on how they've been built), thus contributing to the faction's score.

Check out the strategy board[help] and the voting board[help] - both at your faction camp - for more voting opportunities. More will become available as the weeks go on, so keep checking back!

A World at War

NPC-versus-NPC skirmishes[help] can break out at a number of locations in the world, and their outcomes affect your faction's overall score. Vote wisely on your faction's recruitment strategy - thus affecting the type of fighters your faction fields in these fights. And if you see one in progress, wade in and help!

When you sign up to a faction, you'll earn a token of fealty[help], which gives you 10 teleports to your faction camp per day and unlocks event-related buffs as your personal contribution increases, geared toward improving your performance in the event.

You can requisition rewards from your faction's quartermaster in exchange for your earned renown.

Among these are all-new combat abilities, usable from level 10 in their related skills:

Renown will also buy you hybrid warpriest armour that scales in effectiveness up to level 75 Defence (50 for free players). Also, wearing three pieces or more of the armour earns you a set effect: a chance to reduce your longer ability cooldowns. 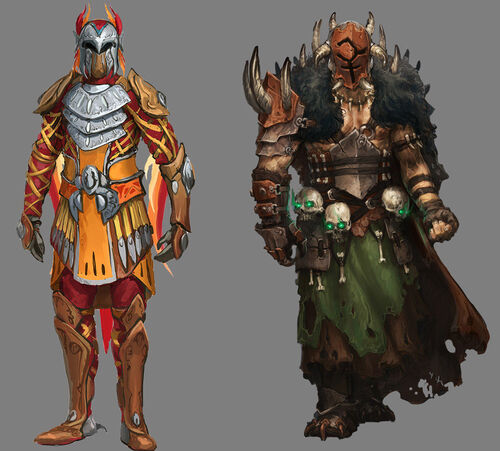 The quartermaster can also grant you faction-specific emotes and titles, as well as generous XP lamps.

More rewards will open up as the weeks progress. Be bold, be resolute, and check back as the event goes on!

Finally, you'll be able to collect sacred metal fragments and faction-specific weapon components as you fight and work on battlefield structures. 1000 fragments and a weapon component can be combined to make orkish or aviansie weapon overrides for claws, shields, throwing weapons and wands.

Keep Up the Fight!

There's something for everyone to do here, in our most epic in-game event yet. The event will develop and escalate as the weeks go on, with plenty of surprises to come. Watch the news and in-game notifications for details!

Fight for the future of your favourite god, but - most importantly - have fun!

How to start The Bird and the Beast:

Speak to Kara-Meir just north of the Falador lodestone. Further details on how to contribute to your side's war effort can be given by those in your faction's camp.

Discuss this on the forums.
Retrieved from "https://runescape.fandom.com/wiki/Update:The_Bird_and_the_Beast_-_World_Event_2?oldid=9778035"
Community content is available under CC-BY-SA unless otherwise noted.