Members with a combat level of 60 or higher can now enter the Crucible[help] and enjoy RuneScape’s most brutal, gut-wrenchingly tense and – of course – potentially rewarding PvP combat, just north-east of Edgeville. Come ready to fight and prepared to die, and only bring items you can afford to have stripped from your ruined corpse! 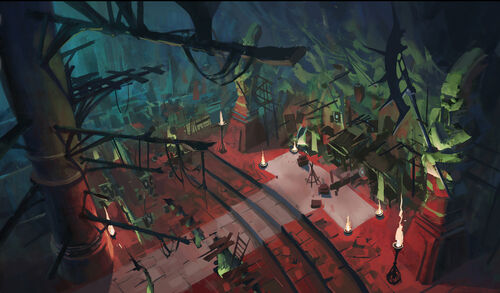 After paying a bounty fee based on your combat level and the value of your armaments, you’ll enter the arena. This fee is paid to your opponent if you turn tail and flee from the Crucible, so be sure you’re ready to rumble before you set foot inside.

Once within the instanced arena - which will be filled with players from across the many RuneScape worlds - you and another player, with equivalent combat skill levels, will be assigned to one another as targets. From then on, you’ll need to seek out your target and engage in combat against them, until one of you is dead or leaves the arena. It’s only possible to fight your designated target, so Succeed, and you’ll be able to loot any equipment and inventory contents borne by your defeated foe (protect prayers and curses cannot be used within the Crucible), so your hard-fought victories will always be well rewarded!

The Crucible is riddled with eerily glowing fissures that can transport you around the arena, and also grant invulnerability for a few seconds after you move between them. Use these to set up an ambush, or to beat a tactical retreat.

You’ll earn points for every target slain and, periodically, the highest ranked players may be named supreme champions of the Crucible. For two and a half minutes, targets will be unassigned, no-one will lose their items upon death, and a special brand of blood-soaked mayhem will ensue. It’s the time of the supreme champions!

Anyone with the supreme champion title gets two minutes of invincibility and three unique, powerful weapons – one for each combat type, and each with its own special attack and function. After those two minutes, the invincibility will wear off and the other players in the arena will have 30 seconds to wreak vengeance and – best of all – to loot the supreme champions’ special weapons and make use of them before they disappear. Attacking the supreme champions will earn you extra points, and claiming the weapons will earn you an increased rate of trophy bones, which can be used to purchase some fun rewards from Marv at the Crucible’s entrance.

The greatest rewards for fighting in the Crucible can be gained by looting items from your defeated foes. Vanquished players will also drop trophy bones, which can be exchanged for death titles and taunts to add insult to your defeated targets’ injury, as well as the permanent ability to gain run energy boosts from using fissures. There are also rogue’s gloves, which – if you’re lucky – can be obtained by looting the ancient remains of long-dead rogue warriors while you’re waiting for a target to be assigned to you. These degradable gloves have good combat stats and grant a bonus to maximum life points when worn, but cannot be used outside of the Crucible and must be repaired before their first use. Marv can do this for you, in exchange for trophy bones.

So, pick up your weapon of choice and gather your courage, wits and fighting spirit. In the Crucible, it’s kill or be killed - and the stakes have never been higher!

The entrance to the Crucible[help] can be found to the north-east of Edgeville, next to the bridge leading to the Grand Exchange.

• New hiscores have been added for the Crucible.