They’ll also be showing up at loads more of your parties as well as throwing the odd party themselves! Remember it’s the last weekend for grabbing anniversary candles and cakes from our impromptu balloon drops, so if you’ve not stomped on a balloon yet this year, why not do it this weekend? Click here for more info!

In other news Paul Gower continues his wander down RuneScape’s memory lane today as he launches the second part of his anniversary blog. Last week Paul looked at exciting First Four Years of RuneScape, touching on various milestones including the launch of Asgarnia, the founding of Jagex Ltd and the launch of RuneScape members' content! In this week’s Next Six Years blog he'll bring us right up to date.

Those of you with an eye for cool design will be pleased to hear that the winning entry of the 10th Anniversary T-shirt Design competition has now been immortalised on the Jagex Store! Our thanks and congratulations go to Ryurinshin for coming up with such a unique design, which you can check out live on our store. 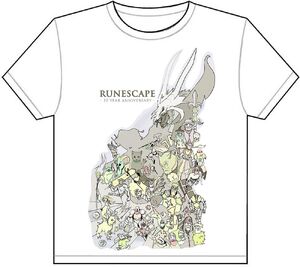 Speaking of unique designs, we had so many great entries to the T-shirt design competition that we’re now planning to release some more T-shirts based on the designs you submitted! We’ll have more information on this soon, so keep your eyes peeled.

Finally, we’re pleased to announce the winner of our 10th anniversary forum quiz! Celtanor astounded us with their knowledge of Gielinor’s history, so well done from everyone at Jagex!

On behalf of everyone here at Jagex, thank you for taking part in our 10th anniversary celebrations and making RuneScape what it is today!