The Kalphite King (members only)

The Kalphite King is here, and he's by far the toughest boss ever seen in RuneScape. He has a combat level of 230; three forms, each requiring different tactics; and an array of devastating attacks, including an ability that can one-hit kill anyone who doesn't avoid it!

The Kalphite King's too much to handle alone, so you'll need to bring friends. You can face him in groups of up to 20, and you'll need to have mastered the full breadth of EoC combat tactics to survive. You'll need to cycle tanks using threat-generating abilities, take careful note of the king and his minions' vulnerabilities, and co-ordinate your group to avoid deadly area-of-effect attacks. 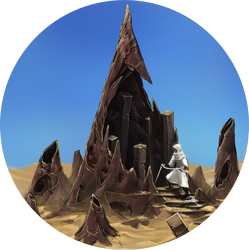 With this in mind, you'll most likely want to face him in a group of friends, with whom you can practice and develop strategies. The Kalphite King's Chamber is instanced, and we've introduced a new grouping system for the area that lets you determine how and with whom you want to undertake this monumental combat feat. When you enter, you'll be asked whether you want to create a new instance or join another, and instances can be locked to a specified number of players; to a minimum combat level; and to those with a pass code of your choice. It's also possible to determine the spawn rate of the king within your instance.

Head into the Exiled Kalphite Hive, if you dare. It's going to take all of your skill and concentration, a group of staunch comrades, high combat levels and the very best gear in the game to take down this mandibulate monstrosity.

Speaking of gear, the Kalphite King brings with him the first level 90 equipment: the grotesquely powerful drygore weapons. Rare drops from the Kalphite King himself, they comprise a rapier, longsword and mace - as well as off-hand equivalents - and are wrought from nightmarish arthropod appendages. They're the very best dual-wielding melee weapons in the game - requiring level 90 Attack - and are sure to lay waste to whatever stands in your way. 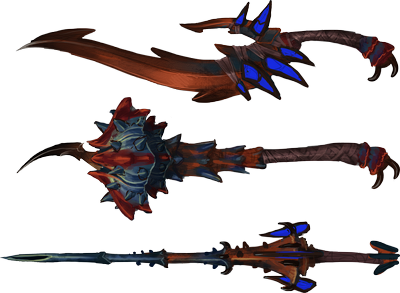 Drygore weapons degrade with use, and can be repaired with chitin gathered from enemies in the new Exiled Kalphite Hive. This will drop in the form of untradeable damaged chitin, but a smith of level 60 or higher can break this down into chitin scraps at an anvil. This will render it tradeable, and ready for use in repairs.

Alternatively, speak to Bob in Lumbridge to repair your weapons in exchange for coins, or do so at an armour stand in your player-owned house.

Zoologists, desert travellers and entomophobes alike are bewildered by the emergence of a new Kalphite Hive in the Kharidian Desert. Home to a new strain of 'exiled' kalphites, it has been theorised that these creatures have broken away from the original hive, and even that they are preparing for war against their former home.

No-one knows for certain why this new hive has been founded; why there are newly-evolved breeds of magic-using kalphite within; or why it is presided over not only by the Kalphite King, but also another Kalphite Queen. For now, those venturing into the hive can expect to find fierce opponents on which to train combat or Slayer, a source of chitin with which to repair drygore weapons, and the entrance to both the Kalphite King's and the Exiled Kalphite Queen's lairs. Drops from kalphites - both regular and exiled - have been improved to make them much more appealing as a combat target, and the original Kalphite Lair has been graphically updated to bring it in line with the quality of the new one, as have all kalphite NPCs, with the exception of the Kalphite Queen.

Where to fight the Kalphite King

We also suggest a group of at least 10 players, as well as the very best gear that your skill level allows you to wear.

If you haven't already, take a tour of the Kalphite King's Chamber in our recent Behind the Scenes video: