Roll out the red carpet! Ready the brass ensemble! Hurl confetti like there’s no tomorrow! Questers and slayers rejoice – we’ve got a brand new quest for you this month and with it comes the availability of the 400th RuneScape quest point. That also means one more slayer prefer & block slot is available, and a new pet.

This quest, which is live today (Monday November 19th) was designed by Mods Osborne and Krista. It’s a novice quest, meaning there are no requirements and that it’s open to everyone, and set in the Piscatoris peninsula.

It’s a story told from multiple perspectives, focussing on a local family and the Needle – a powerful artefact created by the elder gods to aid them with their planetary constructions. Something horrific has happened… but due to the powers of the Needle, the whole site is trapped in some kind of time bubble, leaving an untouched crime scene for you to investigate.

You’ll be using a search engine of sorts, entering clue words that you have discovered to unlock glimpses of history stored inside the bubble. As you discover more clues and clue words, further plot is revealed, finally giving you the chance to save the unfortunate individuals trapped inside.

This is the latest in a long history of detective quests, following the likes of Murder Mystery or One Piercing note. And just like One Piercing Note, it’s a fully voiced quest, and an all-female cast. And, of course, you’ll have access to another elder artefact – the Needle itself. No doubt that will come in handy in the future (or past) too.

Slime is of the Essence

Tossing your food scraps down a well can’t do much harm, right? This is possibly true, providing said scraps aren’t feeding a giant slime, which then emerges from the well and terrorises the local populace.

Slime is of the Essence is a new community event that will run for five days. Over the course of five days players will need to help defeat King Slime in Rimmington by lending a hand to a host of quirky characters. Players will need to employ a new skill each day, and free tools will be offered to help get the job done.

Your reward? We’re not going to spoil that surprise completely, but there will be some tiered Slime Hunter armour, an animation and a slime pet up for grabs.

Players will be able to start the event by popping down to Rimmington when the event begins on Thursday November 22nd.

One thing to note – we had a great time coming up with a name for this one, although it’s an absolute crime that ‘Goo’d Well Hunting’ didn’t prevail. This truly is the darkest timeline. 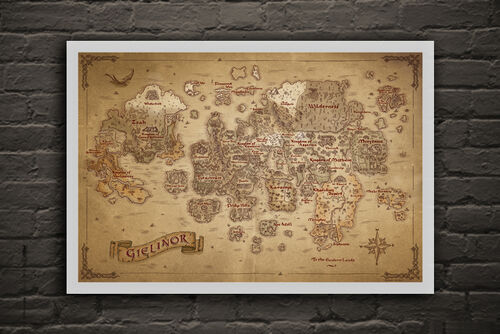 You might have seen this new map of Gielinor offered as prize in a recent survey. Now you can own a copy for your wall. Fine Art Prints are available at 4 different sizes on the store. Click here to see sizes and prices.

Featuring iconic locations from both RS & OSRS and a few familiar creatures, the map is a decorative representation of the shared fantasy world in which the RuneScape games are set.

These are high quality prints on premium materials and the prices do reflect this and we know this might not be for everyone. If you want something less premium, we will also be adding a 80 x 40 cm deskmat featuring the map and a smaller mousemat to the store end of December/early January. The map can also be found on the sleeve art for RuneScape: The Orchestral Collection on vinyl and CD which should be shipping over the next couple of weeks (currently available for pre-order at Laced Records.

Thanks to everyone who took part in our survey last month for the chance to win one of these prints. We have contacted our winners and contacted them through their in-game message centre!

To celebrate the launch of Premier Club, we are giving each and every one of you the chance to WIN a monster gaming PC from the Chillblast factories (i5-8400 / GTX 1060 / 2x 8GB DDR4 RAM / 250GB SSD / 1TB BarraCuda HDD) as well as 6 months of free RuneScape membership.

Entering couldn't be simpler, and if you've been an avid ‘Scaper then you know what to do - just head to this page.

If you’ve been watching our livestreams, you must know that it’s a great opportunity to grab some awesome in-game prizes. And for November, we have ‘Thankful’ prizes that many of you have been asking for – past Thanksgiving Event rewards! That’s right, you might have missed the opportunity to celebrate one of the most delicious American holidays in RuneScape over the last years, so now’s the time to get a bite at that turkey. Rewards unlocked include:

That’s not all! As you may have already noticed, Postie Pete is back. And he has prepared a special LootScape surprise for those of you who follow our streams: an extra Parcel from the Hedge (awarded to non-ironmen players).

Each week, we host developers Q&As, exclusive in-game first looks and more. And it’s all live on our Twitch channel, join us!

You have been requesting more opportunities to exchange with us on current projects, or simply address all sorts of questions that could rise during your adventures in Gielinor – now’s the time to answer them! Join our JMods on the sofas for a general Dev Q&A, a time where you can ask us anything live on the Twitch chat.

Our resident PvM expert Mod Lee knows no fear and he’s ready to take you all on another round of boss mass this Sunday. From Vorago to the Kalphite King, the Corporeal Beast, the Angel of Death, if you’ve got a set to complete, an achievement to unlock, or simply want to hang out with friends and slay some, this is the place and time!

Of course, adventures continue in Gielinor even when we're too busy (PKing) creating the adventures of tomorrow. Our PMods are here to welcome you in a range of PvM Boss Masses, Events and Q&As each week. Check out all the community events organised by the Pink Skirts on their official schedule here.