The Nexus (members only)

There's something unspeakable brewing beneath Lumbridge Swamp, and the druid Ysondria needs your help to send it back to the pit from whence it came! The Nexus is a new training method for the Prayer skill, aimed at low-level players, where you'll channel your inner strength to push back a foul horror emerging from under Lumbridge Swamp. It's designed to be a social training method, so you'll be able to chat to your friends while working through those early Prayer levels.

Head south from Lumbridge to the centre of the swamp and the nature of the corruption will become clear - a dark pit, writhing with tentacles and grasping hands. Speak to Ysondria nearby, who'll tell you the story of how the Nexus came about, and how you can help to hold it back. 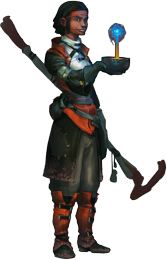 First, you'll need a charmed sack, which you can obtain from Ysondria. When you have this, you can click on the Nexus to fill it with corruption. Once the sack contains some of the Nexus's corruption, it's time to feed it back to the Nexus - using its own evil as a weapon against it. To do this, first locate one of the stone pillars around the Nexus. Click on one the bowls found around the pillar and you'll start to purify the corruption, feeding it back to the Nexus in a far less palatable form! Both of these steps earn you Prayer XP, and low-level players will find that it's a great way to train.

Under certain circumstances[help], the streams feeding into the Nexus will turn orange, and one aspect from each of the four pillars will be blocked, as indicated by a glowing orb above each one. You'll have to switch to a different bowl if you're channelling the blocked aspect when this happens.

If this happens five times, beware - the gruesome grotesque will work its way free of the Nexus! When this horror emerges, click on it to help banish it with sheer strength of will. Succeed, and it'll drop bones that - when buried - grant you a chunk of Prayer XP.

The rate at which you earn Prayer XP from channelling, purifying and burying grotesque bones will vary according to your level. One thing to note, though, is that the XP you can earn from the Nexus (including all three of the above methods) is capped at 37,224 XP. This is enough to get a new player over the first levelling hurdle in this useful skill, and for everyone else it's a nice chunk of XP that can be earned with friends of all levels.

How to start the Nexus[help]:

Take a tour of the Nexus with Mod Krista, in our latest Behind the Scenes video: