Welcome, pesky human, to The Pit[help]! The name’s Scrambles the Werewolf, and I’d like to commend you on your exceptional taste in distractions and diversions.

What’s that? You don’t remember how you got here? Well, you showed a general nimbleness at one of RuneScape’s many agility courses. Snotgut, my sidekick, has written a list of the agility courses and dropped it in a summary box at the bottom of this newspost for you. Go have a look once we’ve finished talking. You see, by gracefully completing several agility laps, you were lucky enough to catch the Talent Scout’s eye and he called you over with his big blue fist. After a chat, he whisked you to The Pit to see ol’ Scrambles and Snotgut, so that you could test your luck on one of our six knee-knocking ‘surprises’: 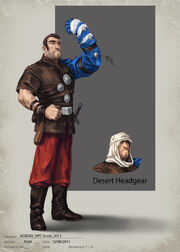 That’s them right there. Proud of those titles, we are. We’ll pick which game you play – at random, of course, as there are no favourites here. Fail at the task and we’ll hand you some of that XP you adventurers seem to like nowadays. Won’t be much, mind: roughly the same you’d have got from the agility course you just left. Knock our hairy socks off with your agility skills, though - beating the diabolical tasks we set you - and you’ll be taken backstage for a bumper batch of XP, a chance to gamble it all, and a gorilla mask. Why a gorilla mask, I hear you ask? Because we think you’ll look...uh...dashing in it. Ha!

Once we’re finished, you’ll be dropped back where you started, where you may/may not have a memory of what happened at the dreaded, befuddling, fantastical Pit! Mwahahahaha!

If you’ve got a level 99 Agility skillcape, you can get a sneak peek at The Pit by simply talking to the Talent Scout.

You can now type up to 255 characters in a private message.